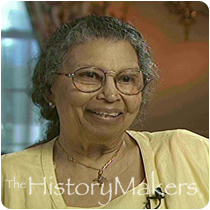 Favorite Color:
Green
Favorite Food:
Grits
Favorite Time of Year:
Spring
Favorite Vacation Spot:
Washington
Favorite Quote:
Do Unto Others As You Would Have Them Do Unto You.

Favorite Color:
Green
Favorite Food:
Grits
Favorite Time of Year:
Spring
Favorite Vacation Spot:
Washington
Favorite Quote:
Do Unto Others As You Would Have Them Do Unto You.

See how Gloria Rackley Blackwell is related to other HistoryMakers

Educator and civil rights activist, Gloria Blackwell (Rackley) was born on March 11, 1927 in Little Rock, South Carolina. Her father, Harrison Benjamin Blackwell, was a barber and her mother, Lurline Olivia Thomas Blackwell, taught at the Little Rock Colored School. Blackwell attended Mather Academy in Camden, South Carolina, graduated from high school in Sumter, South Carolina in 1943 and then enrolled in Claflin College in Orangeburg, South Carolina. There, she was a favorite of President Randolph. Blackwell volunteered for NAACP Youth and was president of the Methodist Youth Fellowship. Leaving school to get married in 1944, Blackwell lived for a time in Chicago. She earned her B.S. degree in education from Claflin College in 1953 and taught in the segregated public schools of Orangeburg. In 1956, Blackwell obtained her M.A. degree in education from South Carolina State University, also in Orangeburg.

In the 1950s, Blackwell served as a recruiter for the Dillon County chapter of the NAACP. Visited often by Thurgood Marshall and Roy Wilkins, the Dillon County NAACP chapter made school integration their top priority. Inspired by the Brown v. the Board of Education decision, Blackwell, known to history as Gloria Rackley, began to participate and lead nonviolent demonstrations to desegregate the schools, hospitals and other public accommodations. In March of 1963, Blackwell joined more than 400 student demonstrators from Claflin College and South Carolina State University led by Charles McDew who marched to desegregate the downtown area. Supported by the community, but arrested countless times, Blackwell served time in prison and was fired from her job by white school officials in the spring of 1963. Blackwell’s daughter, Lurma, an honor middle school student, was arrested some sixteen times by the time she was thirteen years old. Blackwell and her daughter missed a court date when they were arrested for using the White Ladies Only restroom in the courthouse. The civil rights activities in Orangeburg attracted national attention, including a visit from Dr. Martin Luther King, Jr. and an invitation for Blackwell to speak to the National Teachers Union in New York City. Ably defended by Matthew Perry and encouraged by the passage of the Civil Rights Act of 1964, Blackwell accepted a job at Norfolk State University in Virginia in 1964.

At Norfolk, Blackwell served as a professor in the English Department and advised local civil rights efforts from 1964 to 1968. She was director of African American Studies at American International University from 1968 to 1970. She earned her Ph.D. in American Studies from Emory University in 1973 and went on to teach at Clark College until her retirement in 1993.

Blackwell, the mother of two grown daughters and two adopted boys, lived in Peachtree City, Georgia. She was featured along with the other heroes of the Orangeburg movement in the civil rights annals of black photographer Cecil J. Williams.

See how Gloria Rackley Blackwell is related to other HistoryMakers
Click Here To Explore The Archive Today!