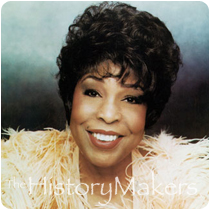 Favorite Color:
Blue
Favorite Food:
Macaroni and Cheese
Favorite Time of Year:
Fall
Favorite Vacation Spot:
Bahamas
Favorite Quote:
Bless The Lord. O My Soul And All That Is Within Me.

Favorite Color:
Blue
Favorite Food:
Macaroni and Cheese
Favorite Time of Year:
Fall
Favorite Vacation Spot:
Bahamas
Favorite Quote:
Bless The Lord. O My Soul And All That Is Within Me.

See how Gloria Lynne is related to other HistoryMakers
Donate Now

Gloria Lynne was born Gloria Wilson on November 23, 1931, in New York City. Lynne grew up in Harlem in the 1930s and 1940s. The daughter of Trinidadian longshoreman, John Wilson, she was raised by her mother, Mary Curtis Wilson, a Creole from Lake Charles, Louisiana. Lynne began singing as a very small child in Harlem’s Mother African Methodist Episcopal Zion Church, but she was also interested in secular music and entered numerous amateur talent contests.

In 1946, Lynne began her career at age fifteen, pretending to be older in order to qualify for a talent contest held at the Apollo Theatre, where she won first prize at “Amateur Night.” Although Lynne formally studied music for five years, much of her learning was gained through playing with jazz musicians. In the 1950s, Lynne recorded with The Enchanters, The Dell-Tones and the Dorsey Sisters. In 1958, at the age of twenty-seven, she was discovered by Raymond Scott, who at the time was a top A&R man at Everest Records. During her time with Everest Records, she made at least ten records between 1958 and 1963.

Lynne’s singing style has been described as a creamy alto, luscious and soothing, calming and sensual. She is a vocalist whose style and songs blur the distinctions among popular singing, jazz and blues. She made both straight jazz and jazz-oriented material during the 1950s and 1960s. In the 1960s, Lynne recorded several hit songs including “June Night,” “Love I Found You,” and “I Wish You Love,” which became her signature song in 1964. Lynne then went on tour with Ray Charles, Billy Eckstine and Ella Fitzgerald among others. Lynne moved into jazz later in her career and performed with many of the jazz greats, including Quincy Jones, Bobby Timmons, Philly Joe Jones and Harry “Sweets” Edison. During the late 1960s and 1970s, Lynne’s popularity waned, though she never stopped performing. In the 1990s, Lynne’s career experienced a strong resurgence when one of her earlier songs, “Speaking Of Happiness,” was used in the movie Seven and was also used in a television commercial for the Ford Motor Company.

Lynne was married for thirteen years and has a son, Richard “P.J.” Alleyne, who also became a musician.

See how Gloria Lynne is related to other HistoryMakers
Donate Now
Click Here To Explore The Archive Today!