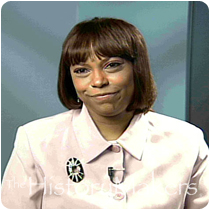 Favorite Color:
Red
Favorite Food:
Chocolate
Favorite Time of Year:
Christmas
Favorite Vacation Spot:
Beaches
Favorite Quote:
To Whom Much Is Given, Much Is Required.

Favorite Color:
Red
Favorite Food:
Chocolate
Favorite Time of Year:
Christmas
Favorite Vacation Spot:
Beaches
Favorite Quote:
To Whom Much Is Given, Much Is Required.

See how Gloria Johnson Goins is related to other HistoryMakers

Gloria Johnson Goins was born and raised in Miami, Florida on April 17, 1963 to Albert and Lillian Johnson. She graduated in the top five percent of her class from Ransom Everglade College Preparatory School in Coconut Grove, Florida. Goins received her B.A. degree in psychology from Stanford University in 1985 and her J.D. degree from the University of Pennsylvania Law School in 1988, where she was also an editor of the Law Review. She received her M.B.A. degree from Mercer University in 2000.

After receiving her law degree, Goins joined the law firm of Fine, Jacobson, Schwartz, Nash, Block & England as an associate in the area of commercial and civil litigation. In 1992, she joined BellSouth Telecommunications as a General Attorney. Goins played a major role in the successful design and implementation of the 678 area code and mandatory ten digit dialing. She also co-authored an article on the Family and Medical Leave Act which was published in the October 1996 issue of the Georgia Bar Journal.

Goins continued her career at BellSouth in the roles of General Attorney and Vice President of Diversity at Cingular Wireless, a division of BellSouth, until May 2003 when she joined the Home Depot Corporation in Atlanta, Georgia as Chief Diversity Officer. Her primary responsibilities as Chief Diversity Officer include creating and implementing global company wide diversity and inclusion initiatives. Some of Goins’ key accomplishments include developing a corporate inclusion council charged with leveraging diversity as a competitive advantage, and the implementation of domestic partner benefits.

Goins is a member of the Home Depot Foundation, the Florida and Georgia Bar Associations and the National and American Bar Associations. She is active in the United Way of America, the NAACP and the Georgia Council of Child Abuse. In 2004, she was named Woman of the Year by Women Looking Ahead magazine.

Goins was interviewed by The HistoryMakers on March 26, 2007.

See how Gloria Johnson Goins is related to other HistoryMakers
Click Here To Explore The Archive Today!