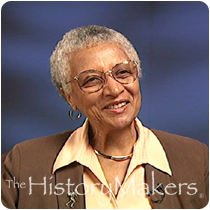 Educator and historical researcher Glennette Tilley Turner was born November 23, 1933 in Raleigh, North Carolina. Her mother, Phyllis, was a teacher, and her father, John, was the first executive director of the SCLC. As a child, Turner moved several times with her family, first to Florida, and then to Illinois. After graduating from high school, she attended Lake Forest College, earning her B.A. in 1955, and she later returned to school at Goddard College to earn her master’s degree in 1977.

After earning her bachelor’s degree, Turner first went to work in advertising, but made the switch to education in 1962. That year, she was hired by the Chicago public school system, and she remained there for four years. In 1966, Turner went to work for the Maywood-Melrose Park public schools, and in 1968, she began teaching in the Wheaton-Warrenville public schools. She remained there for the next twenty years. Today, Turner supervises student teachers at National-Louis University.

Turner lectures widely on the history of the Underground Railroad, and she has been honored numerous times both as an educator and historian. She is the recipient of the Studs Terkel Humanities Award, the Alice Browning Award from the International Black Writers Conference, and she is a member of numerous historical organizations.

Turner and her husband have two grown children. They reside in Illinois.

Glennette TIlly Turner was interviewed by The HistoryMakers on August 12, 2004.

See how Glennette Tilley Turner is related to other HistoryMakers
Donate Now
Click Here To Explore The Archive Today!