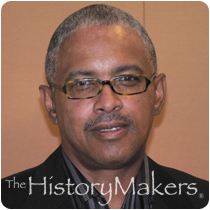 See how Glenn Tunstull is related to other HistoryMakers
Donate Now

Glenn Tunstull was born one of four children on July 29, 1950 in Flushing, New York. Tunstull developed a passion for art at an early age, after witnessing his Uncle Leroy sketching a portrait of his parents. Tunstull’s family moved across the country when he was young, from New York to Louisville, Kentucky finally settling in Detroit, Michigan, where Tunstull attended Cass Technical High School and graduated in 1968 with a concentration in commercial art.

Tunstull won a scholarship to Parsons, the New School of Design. He attended the school for two years before working for various pattern companies. By 1970, Tunstull was illustrating for Vogue magazine and was hired as the first African American illustrator at Women’s Wear Daily. Having built a name in the industry, Tunstull augmented his day work with freelance projects for major designers and department stores.

In 1975, at the age of twenty-five, Tunstull moved to Morocco and shortly thereafter, to Europe, where he worked in Paris and Milan. While working abroad Tunstull created fashion illustrations for the Hermes and Kenzo design houses and for fashion publications that included Marie Claire and Votre Beauté. Tunstull himself was featured in Italian Vogue for his work with WWD and Silvano Malto; he returned to the United States in 1977.

In 1979, Tunstull returned to New York City and began working for a variety of publications, including GQ magazine and The New York Times. In the 1990s, Tunstull began teaching fashion art at the Fashion Institute of Technology, and model drawing classes at his alma mater, the Parson’s School of Design. In 1994, Tunstull served as the keynote speaker at the Society of Illustrators Museum for the Best of Fashion and Beauty Illustration Exhibition.

In 1996, Tunstull shifted his career focus to watercolor landscapes depicting scenes inspired by his travels, particularly trips to Brazil, Jamaica, Australia, and Martha’s Vineyard, where he hosted an annual showing of his artwork. In 1997, Tunstull illustrated Kai: A Big Decision, a children’s book by Sharon Shavers Gayle. In 2000, Tunstull again made a shift in his artistic approach, continuing to work in landscapes but using oil paints, expanding his ability to portray different moods.

See how Glenn Tunstull is related to other HistoryMakers
Donate Now
Click Here To Explore The Archive Today!