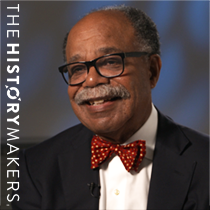 See how Glenn R. Mahone is related to other HistoryMakers
Donate Now

While still attending Duquesne University, Mahone was hired at the Pittsburgh law firm of Reed Smith LLP as its first African American lawyer. Later, in 1982, Mahone was selected as president of the Sheridan Broadcasting Corporation, and appointed to the board of directors of the National Association of Broadcasters. After serving as president of Sheridan Broadcasting Corporation from 1982 to 1985, continuing after that to work as a consultant with the company for several years. Then, in 1991, Mahone was named a partner in the business and finance department of the law firm of Reed Smith LLP, becoming one of a few African American partners at the firm. Mahone was also appointed as founding chairperson of the board of directors for the Alleghany County Airport Authority in 1999, which oversaw the Pittsburgh International Airport and the Alleghany County Airport. From 2004 to 2009 Mahone served as outside counsel to the Pittsburgh Intergovernmental Cooperation Authority, which was created to oversee the City of Pittsburgh’s fiscal recovery.

Mahone has held board memberships and chair positions for numerous community organizations and institutions. In 2008, Mahone was appointed director of the Federal Reserve Bank of Cleveland, Pittsburgh Branch; and in 2012, he became the chairperson of the branch. Mahone also served as the vice president and board chair of the Urban League of Greater Pittsburgh, and president of the Penn Hills branch of the NAACP. In 1984, Mahone received the Black Arts Festival Alumni Award from Pennsylvania State University in recognition of his professional achievements and contributions and his role in the recruitment and retention of African American students and faculty.

Glenn R. Mahone was interviewed by The HistoryMakers on August 18, 2018.

See how Glenn R. Mahone is related to other HistoryMakers
Donate Now