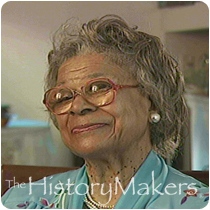 See how Gertrude Hadley Jeannette is related to other HistoryMakers

Playwright, producer, director, and actress of the stage and screen, Gertrude Hadley Jeannette, was born in Urbana, Arkansas, on November 28, 1914, to Willis Lawrence Hadley and Salley Gertrude Crawford Hadley. Jeannette was raised in Arkansas where she attended Dunbar High School in Little Rock. Just before her high school graduation, Jeannette decided that she wanted to get married instead of attending Fisk University, as she had previously planned; she and Joe Jeannette, II, a prizefighter and the president of the Harlem Dusters, a motorcycle club, eloped to New York City in 1934.

In New York City, Jeannette learned to drive; in 1935 she became the first woman to get a license to drive a motorcycle. In 1942, because of the shortage of male taxicab drivers caused by the war, Jeannette became one of the first women to drive a cab in New York City. During this time, Jeannette decided to further her education; she took bookkeeping classes in the basement of Abyssinian Baptist Church, and speech classes at the American Negro Theatre in order to remedy her speech impediments. In 1945, Jeannette was cast in the lead role in Our Town; in 1950, she performed in her first play, This Way Foreward. That same year, Jeannette and Fred O’Neil appeared on television in James Weldon Johnson’s Gods Trombone on CBS’s General Electric Hour; she had replaced Pearl Bailey, who was originally cast in that role. As a result, Jeannette continued to work both in the theatre and in film and television; she went on to play roles in Broadway plays such as Lost In The Stars, Amen Corner, and The Great White Hope. Some of Jeannette’s film credits included Shaft, Black Girl, and Cotton Comes To Harlem.

In 1979, Jeannette founded the H.A.D.L.E.Y. Players (Harlem Artists Development League Especially for You) in the Harlem neighborhood of New York City. The mission of the H.A.D.L.E.Y. Players was to give artists a chance to develop their talents and skills in the theatre, and to enrich the cultural life in Harlem. Jeannette went on to direct, produce, and write her own plays, as well as the works of other playwrights.

Jeannette was presented with several awards for her work and accomplishments. In 1991, Jeannette was honored as a living legend at the National Black Theatre Festival in Winston-Salem, North Carolina, and in 1998, she was honored with the Lionel Hampton Legacy Award. Jeannette was inducted into the Arkansas Black Hall of Fame in 1999, and in 2002, she received the prestigious Paul Robeson Award from the Actor’s Equity Association. Jeanette, though retired, remained an active and celebrated member of the New York theater scene well into her nineties.

See how Gertrude Hadley Jeannette is related to other HistoryMakers
Click Here To Explore The Archive Today!