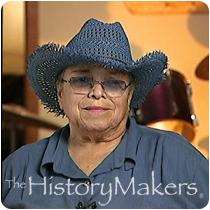 Favorite Color:
Light Blue, Brown, Burgundy
Favorite Food:
Shrimp, Pasta
Favorite Time of Year:
Christmas
Favorite Quote:
Do Unto Others As You Would Have Them Do Unto You.

Favorite Color:
Light Blue, Brown, Burgundy
Favorite Food:
Shrimp, Pasta
Favorite Time of Year:
Christmas
Favorite Quote:
Do Unto Others As You Would Have Them Do Unto You.

See how Geraldine Moore is related to other HistoryMakers
Donate Now

Drummer Geraldine "Gerry" Moore has spent her lifetime entertaining as a drummer. Born on October 29, 1929 in Chicago, Illinois to Guy and Violet Moore, she grew up attending public schools in Chicago and New Orleans, Louisiana, after her mother died while she was a young girl.

Moore set her sights on making music. Her aunt wanted her to take piano lessons in order to play music in church, but Moore wanted to play popular, secular music.

Once in high school, Moore played the valve trombone, which her aunt also disapproved of because of the way it disjointed her jaw. She eventually began to play the drums instead with the concert and marching band at Booker T. Washington High School in New Orleans.

Since high school, Moore has played with various bands, ensembles and groups. She has done shows throughout the United States with traveling groups, such as: the Birdy (Lady Bird) Davis All Star Girl Band, the Phill Cheatum Quintet, the Teddy King Rhythem & Blues Band, the Alvin Cash Band, the Lady Bird Organ All-Girl Trio and the Lady Bird - Two Plus Two quartet with two girls and two men. She also performed with the legendary comic Moms Mabley.

In 1999, the storyline of Moore's musical career was featured in Regina Taylor's play, "Oo-Bla-Dee: Ladies in Jazz." Since 1974, Moore has played with The Organization Ensemble of Dave Anderson and Mars Catchum and, since 2001, with the KCR Lady's Jazz Ensemble.

See how Geraldine Moore is related to other HistoryMakers
Donate Now
Click Here To Explore The Archive Today!