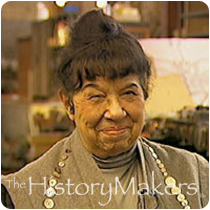 Favorite Color:
Red
Favorite Food:
Fried Chicken
Favorite Time of Year:
May
Favorite Vacation Spot:
Cape Cod, Massachusetts
Favorite Quote:
The Dao That Has Been Spoken Is Not The Dao.

Favorite Color:
Red
Favorite Food:
Fried Chicken
Favorite Time of Year:
May
Favorite Vacation Spot:
Cape Cod, Massachusetts
Favorite Quote:
The Dao That Has Been Spoken Is Not The Dao.

See how Geraldine McCullough is related to other HistoryMakers

Renowned sculptor and painter Geraldine McCollough was born Geraldine Hamilton on December 1, 1917 in Kingston, Arkansas, and raised in Chicago from the time she was three years old. McCullough attended the Art Institute of Chicago for undergraduate and graduate studies, receiving her B.A. degree in 1948 and her M.A. degree in art education in 1955. As a student, she earned a John D. Standecker Scholarship, a Memorial Scholarship and a Figure Painting Citation.

After completing her graduate studies, McCullough taught art at Wendell Phillips High School in Chicago. She also began exhibiting her paintings at various national galleries, receiving first prize in 1961 at the Art Exhibit of Atlanta University. With help from her husband, Lester McCullough, she took up welded sculpture and made her sculpting debut in 1963 at the Century of Negro Progress Exposition in Chicago. She received the George D. Widener Gold Medal for Sculpture in 1965 for her steel and copper structure, Phoenix.

In 1967, she became the chairperson of the Art Department at Rosary College (later Dominican University) in River Forest, Illinois. Upon her retirement from the school in 1989, she was given an honorary doctorate.

McCullough’s various works were informed by African ritual art to European and American influences. She was a distinguished guest artist of the Russian government and her work was exhibited at such respected institutions as the Smithsonian Institution in Washington, D.C. and the National Woman’s Museum.

McCullough was interviewed by The HistoryMakers on July 12, 2002.

See how Geraldine McCullough is related to other HistoryMakers
Click Here To Explore The Archive Today!