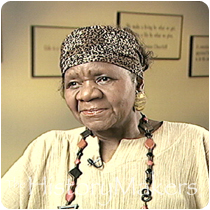 Favorite Color:
Green
Favorite Food:
Mother's Cooking
Favorite Time of Year:
Fall
Favorite Quote:
Do The Best You Can And Then Some.

Favorite Color:
Green
Favorite Food:
Mother's Cooking
Favorite Time of Year:
Fall
Favorite Quote:
Do The Best You Can And Then Some.

See how Geraldine de Haas is related to other HistoryMakers

Geraldine de Haas, “The Jazz Lady,” was born in Newark, New Jersey on January 16, 1935. As a young woman, de Haas sang and toured with her brother and sister as Andy and the Bey Sisters, initially starting out in the Miami club scene in 1958. When they returned to New York after several months, they went to several auditions that promised them a few weeks of club dates in Spain and London. However, their music proved wildly popular, and they went on a whirlwind tour all across Europe that lasted a year and a half.

While the trio was in Europe, they became the featured act at the world famous Blue Note in Paris, and were featured in a jazz film directed by Roger Vadim. De Haas and her siblings returned to the United States in 1960, and began performing at jazz clubs and festivals across the country, and made several recordings, as well. The trio finally disbanded in 1966. The early 1970s found de Haas joining the Free Street Theater in Chicago, and her theater career continued over the next two decades, with performances in Hair, Showboat and To Be Young, Gifted and Black, and numerous jazz performances, as well. She also began producing events during the 1970s, and in 1983, she presented the first Jazzfest at the South Shore Cultural Center in Chicago, which continues on to this day. De Haas also earned her B.A. in music education in 1980 from Chicago State University, and has taken other courses to continue her education since.

In 1981, de Haas founded Jazz Unites, Inc., to further the growth and appreciation of jazz, and to educate people through the use of jazz. Since 1993, she has served as the president, CEO and artistic director. Over the course of her career, she has shared the stage with such jazz legends as Count Basie, Sarah Vaughan, Ella Fitzgerald, and her favorite, the late bass player Ray Brown.

De Haas is married to Edgar de Haas, a prominent jazz musician in his own right. They have two children, both of whom are artists.

See how Geraldine de Haas is related to other HistoryMakers
Click Here To Explore The Archive Today!