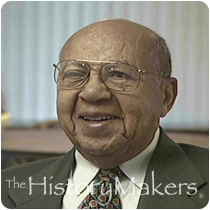 See how Gerald Lamb is related to other HistoryMakers

Gerald A. Lamb, the first African American to be elected to the position of State Treasurer in the United States, was born on August 25, 1924, in Elizabeth City, North Carolina. Lamb was the fourth of five children born to Addie, a homemaker, and Thomas, a teacher and principal. After graduating from high school in Elizabeth City, Lamb served in the U.S. Coast Guard for three years as a chemical warfare specialist. After his honorable discharge, Lamb studied at the Kerpel School of Technology, where he was trained as a dental technician.

After moving to Waterbury, Connecticut, Lamb became the general manager of Waterbury Dental Laboratories and met and married Verna Grier. In Waterbury, Lamb became active in community affairs; he was elected to the board of aldermen, where he served as president pro tempore of the board from 1959 to 1962, and as acting mayor from 1959 to 1961. Lamb went on to make history in 1962, when he was elected treasurer of the State of Connecticut, the first African American to hold this position in the country; he was re-elected in 1966.

Following his tenure as treasurer, Lamb became the commissioner of banking for the State of Connecticut in 1970, which was another first for an African American. In 1971, Lamb was hired as a senior vice-president at Connecticut Bank & Trust (CB&T), the largest bank in Connecticut; he prepared for this position by completing a program at the School of Commercial Lending at the University of Oklahoma. As senior vice-president, Lamb was responsible for public, government, and community relations, and corporate-social responsibilities.

As a prominent Democrat, Lamb was a White House guest on numerous occasions; just three weeks before the assassination of President John F. Kennedy, he met with then Vice President Lyndon Johnson, and they became close friends. Lamb was later designated a special ambassador to Venezuela by President Johnson for the inauguration of Dr. Raul Leoni.

After his retirement from CB&T in 1989, Lamb continued his active life in civic endeavors in Raleigh, North Carolina during the winter and in Martha ’s Vineyard in the summer months. He passed away on March 24, 2014, at the age of 89.

Gerald Lamb was interviewed by The HistoryMakers on June 23, 2005.

See how Gerald Lamb is related to other HistoryMakers
Click Here To Explore The Archive Today!