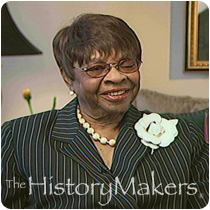 See how Georgia Dickens is related to other HistoryMakers
Donate Now

Retired educator and community volunteer Georgia Nelle Smith Dickens, nicknamed Gee Gee, was born on December 24, 1920, in Atlanta, Georgia. Both of Dickens's parents, Reverend Harvey Miles Smith and Stella Bryant Smith, were college educated individuals who graduated from Morehouse College and Atlanta University respectively. Dickens's parents instilled in her a sense of responsibility, respect for self, and a passion for education. Dickens was raised in Atlanta, Georgia, attending E.R. Carter Elementary School; she went on to attend Madison High School where she graduated in 1937, at the age of fifteen, as the class salutatorian. In 1938, Dickens enrolled in Spelman College where she was voted Miss Personality by her peers; she graduated in 1942.

Dickens started her career as an educator in 1942 in Albany, Georgia; that same year, she married Morehouse College graduate Robert D. Dickens. Dickens moved back to Atlanta and began teaching at Young Street Elementary School, where she enjoyed working with children. While teaching, Dickens volunteered for the Children’s Alliance Theater Guild; she also chaired the United Negro College Fund Telethon and co-chaired the Volunteers Telephone Committee and the Democratic National Convention. After working in the Atlanta Public School System for forty-three years, she retired from teaching in 1982.

Dickens won several awards for her achievements and volunteerism; she was honored as an outstanding volunteer by the United Negro College Fund Telethon. In 1989 Dickens was presented with the President’s Award by the Atlanta Chapter of Delta Sigma Theta Sorority, Inc., Essence magazine’s Ambassador Award; in 2001 she was awarded the Alumnae Achievement Award in Civic Service by Spelman College; in 2003 she won the National Visionary Leadership Award.

Dickens and her husband raised one son.

See how Georgia Dickens is related to other HistoryMakers
Donate Now
Click Here To Explore The Archive Today!