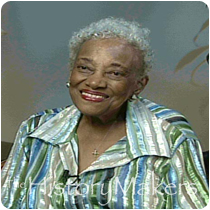 See how Georgette Seabrooke Powell is related to other HistoryMakers

Art therapist, non-profit chief executive, and painter Georgette Ernestine Seabrooke Powell was born on August 2, 1916 in Charleston, South Carolina to Anna and George Seabrooke. Powell grew up in the Yorkville neighborhood of New York City. In the 1930s, she graduated from Washington Irving High School in New York City. She also studied art at the Harlem Art Workshop and the Harlem Community Art Center. In 1933, Powell began majoring in art at Cooper Union Art School in New York, and during this time she was selected to be a part of the Works Progress Administration (WPA), Federal Arts Project.

As an artist through the WPA from 1936-1939 she created murals at Queens General Hospital and Harlem Hospital as well as and did some public art. In 1959, Powell's family moved to Washington, D.C., where she became immersed in Washington's arts society. Studying art therapy in the early 1960s, at the Metropolitan Mental Health Skills Center and the Washington School of Psychiatry, Powell became a registered arts therapist through the American Art Therapy Association. She taught art to promote skill building and self-esteem with mentally ill patients at D.C. General Hospital’s Department of Psychiatry. In 1973, Powell earned her B.F.A. degree from Howard University. In 1975, she founded and directed the Tomorrow’s Art World Center, Inc. to assist young aspiring artists. Powell was a member and President of the District of Columbia Art Association between 1974 and 1998.

Powell’s artistry appeared in seventy-two major art exhibits between 1933 and 2003. She exhibited throughout the United States and in Venezuela, Nigeria and Senegal. Her exhibits have included: a one woman show, “Radiance and Reality,” which she showcased at the Children’s National Medical Center in Washington; and a 1995 show, “Art Changes Things” which was sponsored by the Smithsonian Institute. Her works hang in distinguished permanent collections across the country. An example is "Grandmother’s Birthday," which was acquired by and hangs at the Johnson Publishing Company in Chicago, Illinois.

Georgette Ernestine Seabrooke Powell resides in Palm Coast, Florida and enjoys the company of her three children, grand-children and great-grandchildren.

Georgette Seabrooke Powell passed away on December 27, 2011 at the age of 95.

Georgette Ernestine Seabrooke Powell was interviewed by The HistoryMakers on November 8, 2006.

See how Georgette Seabrooke Powell is related to other HistoryMakers
Click Here To Explore The Archive Today!