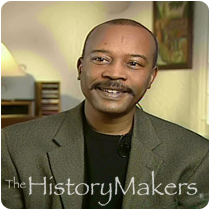 See how George White is related to other HistoryMakers

Pulitzer Prize winning journalist George Gregory White was born on December 3, 1953, in Detroit, Michigan, to Edna and George Bernard White. White was an accomplished student, and his teachers observed his journalistic skills at an early age. He received a scholarship to attend Michigan State University in East Lansing, Michigan, where he graduated with honors with his B.S. degree in journalism and history in 1975. He eventually obtained his M.A. degree in African history in 1981, also from Michigan State University.

White’s first job was at the Minneapolis Tribune from 1975 to 1979. After obtaining his M.A. degree, White worked as a regional correspondent with the Detroit Bureau of U.S. News & World Report from 1982 to 1984. In 1984, White began working for the Detroit Free Press as a reporter and columnist. In 1988, White applied and began working as a reporter and special projects editor at the Los Angeles Times, where he would remain until 1999.

While working for the Los Angeles Times, White’s profile rose considerably in the wake of the 1992 Los Angeles riots. White received a Pulitzer Prize alongside the rest of the L.A. Times team for their coverage. White was honored with an “Outstanding Dedication” citation from the Los Angeles Press Club. In 1994, White was again the recipient of a Pulitzer for his reporting on the Northridge, California Earthquake of that year. In 1995, White also profiled sweatshop slavery in El Monte, California.

From 1992 to 1994, White served as chairman of the Unity Media Access Project, a media education program in Southern California that was cosponsored by the Black Journalists Association of Southern California, the California Chicano News Media Association and the Los Angeles Chapter of the Asian American Journalists Association. In 1993, White received a Unity Award from the Black Journalists Association for his work in the field of community outreach. White has served on the diversity committee and the international news committee of American Society of Newspaper Editors, and was co-chair of the Committee on Diversity at the Los Angeles Times from 1992 to 1994. White is assistant director of UCLA’s Center for Communications and Community. He is also the editor of Context, a journal on media and communities, as well as C3 Online, which reports on communications and community development.

See how George White is related to other HistoryMakers
Click Here To Explore The Archive Today!