Information about George A. Russell, Jr. 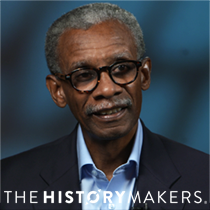 See how George A. Russell, Jr. is related to other HistoryMakers
Donate Now

Bank executive George A. Russell, Jr. was born on May 31, 1949 in Boston, Massachusetts to George and Marie Russell. He received his B.A. degree in social science and mathematics in 1972 from Clark University, in Worchester, Massachusetts, and his M.B.A. degree with a concentration in finance and economics in 1974 from New York University’s Leonard N. Stern School of Business.

Russell started his career as a credit analyst/commercial loan officer trainee at State Street Bank and Trust Company, in Boston, and quickly advanced through the ranks to vice president, from 1974 to 1984. Russell served as treasurer and chief financial officer from 1984 to 1988 for the City of Boston in the administration of Mayor Ray Flynn. Russell served as president and CEO at Freedom National Bank in New York City from 1988 to 1991 and then rejoined State Street Boston Corporation as senior vice president, and was later promoted to executive vice president where he served from 1991 to 2013. He also served as director of corporate citizenship, and chairman and president of the State Street Foundation. In this dual role, he directed State Street’s global corporate contribution and employee volunteer programs. In addition, he was responsible for managing the company’s community relations functions globally. Under his leadership, State Street provided support for a variety of community-based organizations including the Metropolitan Boston Housing Partnership and the Boston Private Industry Council.

Russell received the Alumni Achievement Award from New York University Leonard Stern Graduate School of Management in 1989. He was elected chairman of the board for the Urban League of Eastern Massachusetts, from 1999 to 2005, and served as board member for One United Bank, from 2004 to 2012. Russell received an honorary doctor of law degree from the University of Massachusetts in 2010, and an honorary degree from the Urban College in 2014.

He was past founding chairman of the board of the Financial Services Academy. Russell also served on the board of advisors of the African Presidential Archives and Research Center at Boston University, and as a trustee of the Massachusetts Math and Science Initiative. He serves on the board of directors of One United Bank, the largest Black owned and operated bank in the United States, and as a member of the board of trustees of Tufts Health Plan Foundation.

George and his Wife Faye have one child, Martin Russell, daughter-in-law Ashley and granddaughter, Maya.

George A. Russell, Jr. was interviewed by The HistoryMakers on August 20, 2018.

See how George A. Russell, Jr. is related to other HistoryMakers
Donate Now