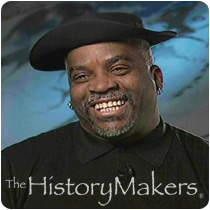 See how George N'Namdi is related to other HistoryMakers
Donate Now

In 1970, N’Namdi was appointed regional education director for Head Start in Southwestern Ohio. When he moved to Ann Arbor in 1972 to work on his graduate degrees in psychology, N’Namdi became involved with the Black Student Psychological Association and cultural thinkers such as Geneva Smitherman and Niara Sudarkasa. During this period, N’Namdi and his wife changed their surnames to N’Namdi, which means “father’s name lives on” in the Ibo language of Eastern Nigeria. In the mid seventies, N’Namdi served as a therapist at Milan Federal Prison and taught courses at the University of Michigan. In 1978, N’Namdi and his wife Carmen founded the Nataki Talibah School House; the Detroit based independent grade school, named for their late daughter, consistently outperformed local and state schools while teaching transcendental meditation and emphasizing the arts.

N’Namdi began collecting art in 1968; with a partner, in 1981, he opened Jazzonia Gallery. In 1982 N’Namdi launched his family based G.R. N’Namdi Gallery; he later expanded his holdings to include galleries in Chicago and in New York City. N’Namdi’s son, Jumaane, manages the Chicago gallery and his daughter, Kemba, helps with the Detroit site. While exhibiting the works of artists Hughie Lee Smith, James VanDerZee, Allie McGhee, and Barbara Chase Riboud, N’Namdi is creating a $3 million dollar complex in Detroit’s Cultural Center arts district.

See how George N'Namdi is related to other HistoryMakers
Donate Now
Click Here To Explore The Archive Today!