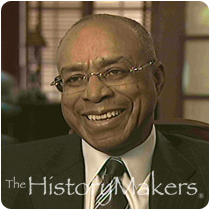 See how George Lewis is related to other HistoryMakers

Pioneering corporate executive George Ralph Lewis was born on March 7, 1941, in Burgess, Virginia, a small Chesapeake Bay fishing village. His mother, Edith Toulson Lewis, was a homemaker, and his father, Spencer Lewis, was very enterprising and held several jobs to support his family, including working on the docks, cooking and later, starting his own business renovating homes. Expected by his parents and community to go to college, Lewis enrolled at Hampton University in Hampton, Virginia. Following his first year of college, Lewis spent the summer working for his uncle, a Philadelphia restaurant owner. Delivering food downtown, Lewis overheard businessmen talking about their deals, and he decided to pursue a career in business. Returning to school that fall, Lewis changed his major to accounting and earned his B.S. degree in 1963. Later, in 1968, he earned his M.B.A. degree from Iona College in New Rochelle, New York.

Lewis’ first major job was with General Foods Corporation as a sales analyst for the Kool-Aid division in New York. In 1966, he moved to W.R. Grace, a specialty chemical company, where he worked as a financial analyst. In 1967, Philip Morris hired Lewis as a corporate analyst, and the next year, he became a senior planning analyst. He was promoted to Manager of Industrial Relations in 1970, Manager of Financial Services in 1972 and Assistant Treasurer in 1973. In 1975, Lewis became Treasurer and Vice President of Financial & Planning for Philip Morris Industrial, a subsidiary company. In 1982, he moved to Milwaukee, Wisconsin, where he worked for a different subsidiary, the Seven-Up Company, as Vice President of Finance. After two years, Lewis returned to the parent company, Philip Morris Companies, Inc., as Vice President and Treasurer. At that time, one of the highest-ranking blacks in finance, he was in charge of Philip Morris’ worldwide treasury activities. He oversaw the company’s takeover of General Foods in 1985 and of Kraft in 1988. In 1997, Lewis became President and CEO of Philip Morris Capital Company, the finance and investment subsidiary of Philip Morris. He retired from this position in 2001.

Lewis has received numerous awards for his pioneering business achievements. Both Iona College and Hampton University have recognized him, and in 2000, he received a CNN Trumpet Tower of Power Award. In 2006, the Jackie Robinson Foundation honored him with a lifetime achievement award. He has served on the boards of several large corporations and organizations, including the Professional Golfers’ Association of America, where he became the board’s first black member in 1995.

George Lewis was interviewed by The HistoryMakers on September 7, 2007.

See how George Lewis is related to other HistoryMakers
Click Here To Explore The Archive Today!