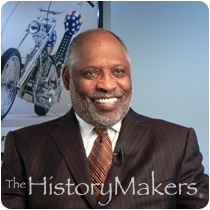 See how George L. Miles, Jr. is related to other HistoryMakers

George L. Miles, Jr. was born on November 13, 1941 in Orange, New Jersey. He is one of Eula and George Miles’ seven children. In 1963, Miles earned his B.A. degree in accounting from Seton Hall University and his M.B.A. from Fairleigh Dickinson University in 1970. He also became a New Jersey-licensed certified public accountant in 1972.

Following his graduation from Seton Hall University, Miles worked for the Department of Defense for six years in the Defense Audit Agency as a contract auditor during President Kennedy and President Johnson’s terms in office. In 1969, Miles began work with Touche Ross & Company in New York City. In 1972, he left as an audit manager. While at Touche Ross, Miles studied at Fairleigh Dickinson University to earn his M.B.A. He joined KDKA-TV/DKDA-AM/WPNT in 1978, working as a business manager and controller. From 1981 through 1984, Miles served as station manager for WBZ-TV in Boston. In 1983, assigned by Westinghouse Broadcasting, Miles served as Chief Administrative Officer for National Public Radio (NPR), in order to analyze, develop and execute plans and procedures which allowed NPR to obtain relief from fiscal difficulties. Between 1984 and 1994, Miles became Executive Vice President & Chief Operating Officer of WNET/13 in New York. In 1994, Miles was appointed President and CEO of WQED Multimedia, a public broadcasting media company which encompasses WQED-TV, WQEX-TV, WQED-FM and PITTSBURGH magazine.

Miles has received Honorary Doctorates from Robert Morris University, La Roche College and St. Joseph’s College. He is also a recipient of the Pinnacle Award for Outstanding Achievement as an alumnus of Fairleigh Dickinson University. In 2006, The New Pittsburgh Courier named him one of the “Fifty Most Influential African-Americans.” Miles was also the 2007 Recipient of the Point Park University Performing Arts Partnership & Achievement Award.

Miles lives in Pittsburgh and is married to Janet L. Miles. They have a daughter, Tammy and granddaughter, Taylor.

Miles was interviewed by The HistoryMakers on August 12, 2008.

See how George L. Miles, Jr. is related to other HistoryMakers
Click Here To Explore The Archive Today!