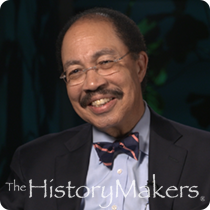 Lawyer George Keith Martin was born on September 24, 1953 in Fort Lee, Virginia to Dr. Henry S. Martin and Ruby Grant Martin. Martin was raised in Washington D.C. while his mother, a civil rights attorney, headed the Office of Civil Rights in the United States Department of Health, Education and Water. Martin earned his B.A. degree in speech communications from the University of Virginia in 1975, and his J.D. degree from the Howard University School of Law in 1978, where he was the managing editor of the Howard Law Journal.

Martin began his legal career in 1978 as a litigation associate at the law firm of Hirschler, Fleischer, Weinberg, Cox & Allen in Richmond, Virginia. In 1984, he became a partner at the law firm of Wilder, Gregory & Martin – a firm founded by L. Douglas Wilder, the first African American governor of Virginia. In 1990, Martin joined McGuireWoods L.L.P. as a partner and was later promoted to managing partner. Martin practiced construction, commercial real estate and local government law, representing multiple real estate clients including Fortune 100 and Fortune 500 companies, schools, and state legislature. In addition to working as a corporate attorney, Martin served as a school administrator, beginning in 1999. That same year, he was appointed to James Madison University’s board of visitors by Virginia Governor Jim Gilmore, serving until 2003. In 2002, Martin was appointed to the board of visitors at Regent University School of Law. In 2011, he was appointed by Virginia Governor Robert McDonnell to the University of Virginia’s board of visitors. The following year, Martin was elected the first African American rector of the University of Virginia's board of visitors.

Martin served on the Virginia Board of Bar Examiners in 1991, and as general counsel for the Richmond Redevelopment and Housing Authority. He also consulted on multiple construction and redevelopment projects across the country, and volunteered as a child minister at Faith Landmarks Ministries in Henrico County, Virginia beginning in 1985. Martin was the recipient of multiple awards for his work and community service, including the Raven Award from the University of Virginia and the Jasper Trailblazer Award from Richmond’s Sixth Mount Zion Baptist Church.

Martin and his wife, Anita Martin, have three children: Hayley, Kelly and Mallory.

George Keith Martin was interviewed by The HistoryMakers on December 6, 2016.

See how George Keith Martin is related to other HistoryMakers
Donate Now
Click Here To Explore The Archive Today!