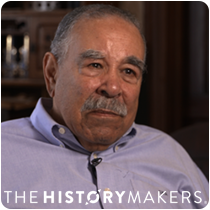 Civic leader and municipal official George K. Arthur was born on June 29, 1933 in Buffalo, New York to Jayne Arthur and William Arthur. Arthur attended School 32 and graduated from Seneca Vocational High School in 1951. After serving in the U.S. Army’s Signal Corps from 1953 to 1955, Arthur took night classes at the University of Buffalo’s Millard Fillmore School. He later earned his B.A. degree in political science at Empire State College in 1977.

Arthur worked briefly at Bethlehem Steel and as a photo technician at PhotoTech Studios in Buffalo. In 1964, Arthur won a seat on the Erie County Board of Supervisors, serving until 1967. From 1970 to 1976, he worked as a narcotics counselor for the New York State Office of Drug Abuse. He also served on the Buffalo Common Council as a representative of the Ellicott District from 1970 to 1977. With the support of the Buffalo branch of the NAACP and the Citizens’ Council for Human Relations, Arthur was one of the plaintiffs to file a school desegregation lawsuit against the City of Buffalo in 1972. In 1976, the courts ruled their favor. Arthur was elected in 1978 to serve as councilman-at-large on the Buffalo Common Council. He served as president of the Buffalo Common Council from 1984 to 1996. In 2002, Arthur was selected to serve as chair of the Citizens’ Advisory Commission on Reapportionment. He also served as chair of the Erie Council Charter Revision Commission and secretary of the Buffalo Fiscal Stability Authority. In 2008, Arthur served as a Barack Obama delegate to the Electoral College.

Arthur served as president and treasurer of the Michigan Street Preservation Corporation, and oversaw the preservation of Reverend J. Edward Nash’s home in Buffalo. In 2007, Arthur was honored with the Red Jacket Award from the Buffalo and Erie County Historical Society. He was also a recipient of the NAACP Medgar Evers Award and the citizen of the month award from the Erie County Legislature. In 2017, Arthurs’ likeness was included on The Freedom Wall in Buffalo.

George K. Arthur was interviewed by The HistoryMakers on April 21, 2018.