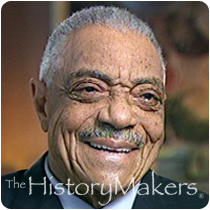 Favorite Color:
Brown
Favorite Food:
Chicken
Favorite Time of Year:
Summer
Favorite Vacation Spot:
Jamaica
Favorite Quote:
Do unto others as you would have them do unto you.

Favorite Color:
Brown
Favorite Food:
Chicken
Favorite Time of Year:
Summer
Favorite Vacation Spot:
Jamaica
Favorite Quote:
Do unto others as you would have them do unto you.

See how George Johnson is related to other HistoryMakers
Donate Now

George E. Johnson, Sr. was born in Mississippi on June 16, 1927, in a three-room sharecropper’s shack. Following his parent’s separation, Johnson moved to Chicago with his mother, Priscilla, in 1929. Johnson began working shining shoes at the age of eight while attending Doolittle Elementary School. He then attended Wendell Phillips High School for three years before quitting to work full-time.

Johnson worked during the day as a busboy, and in the evenings he set pins in a bowling alley. In 1944, he went to work for S.B. Fuller, a black-owned cosmetics firm, as a production chemist. In 1954, at the encouragement of Herbert Martin, a German-born chemist at S.B. Fuller, Johnson left the company and founded Johnson Products, focusing on the African American male hair care market. The seed money for the company came from a loan of $500 that had been earmarked as a vacation loan. Within three years, Johnson Products found success in the women’s hair care market with the development of Ultra Sheen, a revolutionary hair straightener that could easily be used in the home. Over the next few decades, Johnson Products continued to grow, focusing its efforts on not only creating quality products, and also on training cosmetologists on proper usage. In 1964, Johnson founded Independence Bank, and during the 1960s he became the exclusive sponsor behind the nationally syndicated dance show Soul Train. In 1971, Johnson Products became the first African American-owned company to be listed on the American Stock Exchange. That same year, Johnson became the first African American to serve on the board of directors of Commonwealth Edison.

In the mid-1980s, more and more competitors began entering the African American hair care industry and the Federal Trade Commission forced Johnson Products to put warning labels on lye-based products, without requiring Revlon to do the same. In 1989, Johnson and his wife of thirty-nine years, Joan, divorced. As a part of the divorce settlement, Johnson transferred 49.5 percent of the company over to her. Their son, Eric, took over the reins, but left the company in 1992, and the company was sold to IVAX for $61 million the following year. In 1995, Johnson and Joan remarried, and in 1998, Carson Products bought the company.

During the course of his career, Johnson received numerous honors. Ebony magazine awarded him with its American Black Achievement Award in 1978, and in 1979 Johnson received the public service award of the Harvard Club for the work of the George E. Johnson Foundation and the George E. Johnson Educational Fund. He has been active with a number of civic organizations, as well, including the Chicago Urban League, the Lyric Opera, Northwestern Memorial Hospital and Operation PUSH.

See how George Johnson is related to other HistoryMakers
Donate Now
Click Here To Explore The Archive Today!