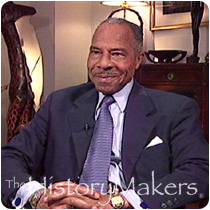 Favorite Color:
Blue
Favorite Food:
Southern Fried Chicken
Favorite Time of Year:
Summer
Favorite Vacation Spot:
Cruises
Favorite Quote:
I'm Only One, But I Am One. I Can't Do Everything, But I Can Do Something. And Because I Cannot Do Everything, I Will Not Refuse To Do The Something That I Can Do.

Favorite Color:
Blue
Favorite Food:
Southern Fried Chicken
Favorite Time of Year:
Summer
Favorite Vacation Spot:
Cruises
Favorite Quote:
I'm Only One, But I Am One. I Can't Do Everything, But I Can Do Something. And Because I Cannot Do Everything, I Will Not Refuse To Do The Something That I Can Do.

See how George Haley is related to other HistoryMakers
Donate Now

Attorney George Williford Boyce Haley was born on August 28, 1925, in Henning, Tennessee. He grew up on a number of college campuses, as both his parents were university professors. As a young boy living at Alabama A&M at Normal, Alabama, he met Dr. George Washington Carver. While a student at J. C. Corbin High School in Pine Bluff, Arkansas, he played the french horn with the Arkansas AM&N College marching band. In 1943 Haley moved to Bordentown, New Jersey and graduated from Bordentown High School, a military boarding school. Two months after graduation, he was drafted into the U.S. Military and served for the next three years.

From 1946 until 1949, Haley attended Morehouse College with Dr. Benjamin Elijah Mays as president, and fellow students Martin Luther King, Jr., and Lerone Bennett. After receiving his bachelor of arts degree, he accepted a challenge from his father and became the third African American student admitted to the University of Arkansas Law School where he was one of five African Americans at the school.

While at Arkansas, he endured horrendous acts of racism, including having a bag of urine thrown in his face and facing daily verbal insults. At the end of his first year he scored the highest marks on his final examinations and by the end of his second year he was writing articles for the Law Review. He received his law degree in 1952, becoming the second African American to graduate from Arkansas.

After receiving his law degree, he joined the firm of Stevens Jackson in Kansas, who are often referred to as the architects of the landmark civil rights case, Brown v. the Board of Education. While still working in private practice, Haley served as Deputy City Attorney from 1954-1964. He then embarked on a political career and was elected as a Kansas State Senator. He held that post from 1964-1968.

In 1966, Haley unsuccessfully ran for the U.S. Congress; nonetheless he still landed in Washington, D.C. In 1969, Haley was appointed Chief Counsel of the Urban Mass Transportation Administration (Federal Transit Administration) by President Richard Nixon. From 1973-1976, he served as Associate Director for Equal Employment Opportunity at the United States Information Agency (USIA). Upon leaving USIA, he became a partner in the law firm of Obermayer, Rebmann, Maxwell and Hippel of Philadelphia and Washington, D.C. before establishing his own firm in 1981. In 1986, he made another unsuccessful bid for the U.S. Senate in Maryland.

In 1990, President George H. W. Bush appointed Haley as Chairman of the Postal Rate Commission, where he served for the next eight years, after being re-commissioned by President Bill Clinton. In April of 1998, President Clinton named him U.S. Ambassador to The Gambia in West Africa, where he served until 2001. Haley also served as the executor of the estate of Pulitzer Prize winning novelist Alex Haley, his brother.

George Haley was interviewed by The HistoryMakers on May 20, 2004.

See how George Haley is related to other HistoryMakers
Donate Now
Click Here To Explore The Archive Today!