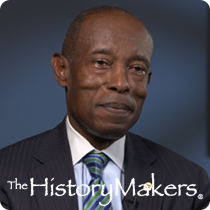 See how George H. Lambert is related to other HistoryMakers

Nonprofit executive George H. Lambert was born on May 12, 1951 in Washington, D.C. to George H. Lambert, Sr. and Arnitha Green Allen. Lambert graduated from William Penn Senior High School in York, Pennsylvania in 1971. He went on to earn his B.A. degree in urban studies from Virginia Union University in Richmond, Virginia in 1975.

Upon his college graduation, Lambert worked for two years at the Richmond Community Action Program. Then, he became a community organizer for the Northern Virginia branch of the Washington Urban League in Alexandria, Virginia. Lambert was hired as the executive director of the Northern Virginia branch of the Washington Urban League in 1980. He also co-founded the Alexandria Forum, as a space for civil rights groups to collaborate on key issues and strategic planning. In 1990, he led the branch’s transition into the fully affiliated Northern Virginia Urban League. During his tenure as the executive director, Lambert also served as a senior regional consultant to the National Urban League. Lambert left the Northern Virginia Urban League in the mid-2000s, at which time he served as a senior director for resource development for the United Way of the National Capital area and as the vice president of public affairs at Issue Dynamics, Inc. From 2011 to 2013, he served as the president and chief executive officer of the Lorain County Urban League in Elyria, Ohio. Lambert was then appointed as the president and chief executive officer of the Greater Washington Urban League in 2014. In this role, he created the Thursday Network, which facilitated interactions between African American youth and the Metropolitan Police Department of the District of Columbia. Lambert also worked with the Washington Nationals to institute Black Heritage Day at Nationals Park; and he partnered with corporations like Potomac Electric Power Company to offer utility assistance in the African American community.

He was a member of the National Urban League’s Association of Executives; the Academy of Fellows. He was also a parishioner of Alfred Street Baptist Church in Alexandria, Virginia.

Lambert and his wife, Bernadette Curtis-Lambert, have five children together.

George H. Lambert was interviewed by The HistoryMakers on February 2, 2017.

See how George H. Lambert is related to other HistoryMakers
Click Here To Explore The Archive Today!