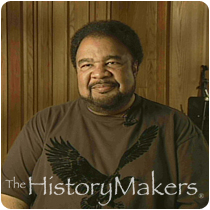 See how George Duke is related to other HistoryMakers

George Duke was born George Mac Duke on January 12, 1946, in San Rafael, California. Duke was raised in Marin City, a working class section of Marin County. After his mother took him to see Duke Ellington perform, he started studying the piano and began absorbing the roots of black music in his local Baptist church. Duke attended Tamalpais High School in Mill Valley. By the age of sixteen, Duke was playing with a number of high school jazz groups. He received his B.A. degree in music from the San Francisco Conservatory of Music, majoring in trombone and composition with a minor in contrabass. He then obtained his M.A. degree in composition from San Francisco State University.

Duke first captured the attention of the jazz world with his collaboration with Jean-Luc Ponty and the album The Jean-Luc Ponty Experience with the George Duke Trio. In the early 1970s, Duke became known for his solo work as well as for his collaborations with other musicians, particularly Frank Zappa. Duke joined veteran jazzman Julian "Cannonball" Adderley in 1971. Through “Cannonball”, he was given the opportunity to meet and work with artists such as Nancy Wilson, Joe Williams, Dizzy Gillespie, Stanley Clarke, Flora Purim and Airto Moriera. In 1973, Duke rejoined Zappa and brought Jean-Luc Ponty with him. That band stayed together for the next three years, until Duke left to join forces with drummer Billy Cobham. In 1976, Duke became a solo artist and enjoyed success with a series of fusion-oriented LP's such as, From Me To You. In 1978, Duke’s funk heavy album Reach For It went gold and propelled him to the top of the music charts. A year later, he recorded his best known album, A Brazilian Love Affair. About the same time, Duke decided to begin a career in music producing. His breakthrough in producing came with an album by A Taste of Honey. The single, "Sukiyaki," went to Number 1 on the pop, adult contemporary and R & B charts, ultimately selling over two million copies. Duke went on to produce and collaborate with such artists as Jeffrey Osborne, Deniece Williams, Stanley Clarke, Barry Manilow, Smokey Robinson, The Pointer Sisters, Gladys Knight and Anita Baker. In addition, Duke has acted as musical director for numerous musical television specials, including the Soul Train Music Awards. During the 1990s, Duke also established a career in television and film scoring, working on the music for such films as The Five Heartbeats, Karate Kid III, Leap Of Faith, Good Fences and Never Die Alone. In 2001, Duke won a Grammy Award for producing the Best Jazz Vocal Album: Dianne Reeves’ In The Moment. In 2005, Duke served as artist and emcee for a special series of concerts in India as part of a delegation of American jazz musicians sent on a State Department tour to promote HIV/AIDS awareness.

Duke continues to both produce and release new albums, his latest being Dukey Treats in 2008. Duke is the recipient of numerous awards including multiple Grammy nominations, the Edison Life Time Achievement Award, and Keyboard Magazine’s "R&B Keyboardist of The Year."

See how George Duke is related to other HistoryMakers
Click Here To Explore The Archive Today!