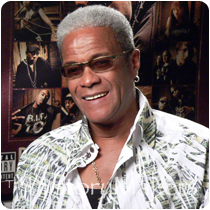 Favorite Color:
Rainbow
Favorite Food:
Mixed Greens, Ham Hocks
Favorite Quote:
If I Only Knew Then What I Know Now.

Favorite Color:
Rainbow
Favorite Food:
Mixed Greens, Ham Hocks
Favorite Quote:
If I Only Knew Then What I Know Now.

See how George Daniels is related to other HistoryMakers
Donate Now

Record store owner George Xavier Daniels was born on December 18, 1946 in the Bronx, New York to Elvina and George Daniels, who were restaurant owners. After his parents separated, Daniels was sent to live with relatives in Texas. Having a hard time adjusting to the racist South, Daniels did, however, seem to develop an affinity for southern music. When he moved to Chicago, Illinois to live with his father and half-brother before high school, he became attracted to Chicago’s blues and early rock scene. In high school, Daniels played the trumpet. He graduated from Luke Junior College in Chicago, which he attended to avoid being drafted into the Vietnam War.

After working for a short time at a steel mill, Daniels took a job as a janitor at legendary Chess Records in Chicago. There, he met and heard artists like Muddy Waters, Etta James, The Dells and Ramsey Lewis among many others. At the same time, Daniels watched the independent music industry achieve some of its greatest successes. He then was hired at a black-owned record store wholesaler on Chicago’s Michigan Avenue. In 1968, Daniels started managing one of the wholesale record stores, and in 1969, Daniels assumed ownership of the store, renaming it George’s Music Room.

For the first three years, Daniels was the only employee and worked sixteen hours a day. Overcoming bankruptcy and evictions, Daniels’s biggest problems have come from the modernization of the music industry. Daniels created and headed the National United Independent Retailers, an organization dedicated to preserving African American-owned independent retailers.

Daniels’ business has continually adapted. He has maintained his popularity in the community with artists’ store visits. These artists have included Mary J. Blige, LL Cool J, Al Green, R. Kelly, Alicia Keys, and The Temptations. George’s Music Room was singled out by Chicago’s Mayor Richard Daley as a quintessential Chicago store and offered a space to open a branch at Midway Airport, which Daniels has operated successfully ever since.

Daniels was interviewed by The HistoryMakers on April 23, 2007.

See how George Daniels is related to other HistoryMakers
Donate Now
Click Here To Explore The Archive Today!