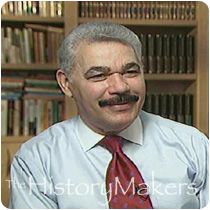 See how George Cylie Fraser is related to other HistoryMakers

Fraser spent seventeen years in management with Proctor & Gamble, the United Way and the Ford Motor Company. He wrote his first book, bestseller Success Runs in Our Race: The Complete Guide to Effective Networking in the African Community, in 1994. His second book, Race for Success: The Ten Best Business Opportunities for Blacks in America, was selected as one of the ten best business books of 1999 by Booklist magazine. He is also the creator and publisher of the award winning SuccessGuide: The Networking Guide to Black Resources. Twenty versions of SuccessGuide have been published and a worldwide edition was released in August 2000.

Fraser has received many awards and citations for his community service, including the United Negro College Fund National Volunteer of the Year Award and an Architects of the Village Award from Allstate Insurance. He is listed in the Guinness Book of World Records. In 1986, as director of marketing and communications for the United Way of Cleveland, he conceived, planned and led the release of 1.4 million balloons, the largest single balloon release in history.

The publication Vital Speeches of the Day has selected three of Mr. Fraser’s speeches to be reprinted and distributed worldwide, a first for any professional speaker in America.

He has been featured in articles in Black Enterprise and Upscale magazines.

Fraser and his wife, Nora Jean (née Spencer), are the parents of two sons.

See how George Cylie Fraser is related to other HistoryMakers
Click Here To Explore The Archive Today!