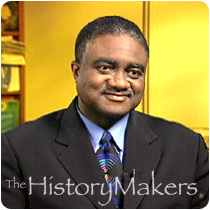 See how George Curry is related to other HistoryMakers

George Edward Curry was born on February 23, 1947, in Tuscaloosa, Alabama; his mother worked as a domestic and his father was a mechanic. Curry's father abandoned the family when Curry was just seven years old, leaving him to step into the role of the man of the house, assisting his mother in raising his three younger sisters. In 1965, Curry earned his high school diploma from Druid High School, where he was a member of the football team and sports editor of the school newspaper.

In 1966, Curry moved to New York where he worked for The Student Nonviolent Coordinating Committee (SNCC) for a year. He went on to study at Knoxville College in Tennessee. Fulfilling a lifelong dream, Curry began his professional journalism career as a reporter for Sports Illustratedmagazine in 1970; he was the second African American hired by the publication.

After leaving Sports Illustrated in 1972, Curry headed west and worked as a beat reporter for The St. Louis Post-Dispatch until 1983. In 1977, he founded the St. Louis Minority Journalism Workshop, a training program for aspiring high school journalists; that same year, he wrote his first book Jake Gaither: America’s Most Famous Black Coach. From 1983 until 1989, Curry worked for the Chicago Tribune as a Washington Correspondent, covering political stories such as Jesse Jackson’s 1984 presidential campaign. From 1989 until 1993, Curry worked as the New York bureau chief of the Tribune. From there, Curry served as editor-in-chief of Emerge magazine until it folded and printed its final edition in 2000; under his leadership the magazine won more than forty national journalism awards.

In 2001, Curry became editor-in-chief for the National Newspaper Publishers Association News Service, or NNPA, and BlackPressUSA.com; his weekly syndicated column appeared in more than two hundred African American newspapers. While at NNPA, Curry’s work has included covering the Supreme Court’s decision on the University of Michigan’s affirmative action case and America’s war with Iraq.

George Curry was interviewed by The HistoryMakers on September 27, 2004.

See how George Curry is related to other HistoryMakers
Click Here To Explore The Archive Today!