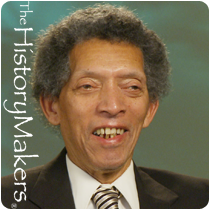 Astrophysicist George Robert Carruthers was born on October 1, 1939 in Cincinnati, Ohio. His father was a civil engineer and his mother worked for the U.S. Postal Service. The family lived in Milford, Ohio until Carruthers’ father died suddenly and his mother moved the family back to her native Chicago. As a child, he enjoyed visiting Chicago museums, libraries, planetariums and was a member of the Chicago Rocket Society and various science clubs. In 1957, Carruthers earned his high school diploma from Englewood High School in Chicago, also the same year the Russians launched the first Sputnik.

Carruthers attended the University of Illinois, earning his B.S. degree in aeronautical engineering in 1961. He also pursued his graduate work at the University of Illinois, earning his M.S. degree in nuclear engineering in 1962 and his Ph.D. in aeronautical and astronomical engineering in 1964. While conducting his graduate studies, Carruthers worked as a research and teaching assistant studying plasma and gases. In 1964, Carruthers began working for the Naval Research Laboratory in Washington, D.C. where his work focused on far ultraviolet astronomy. In 1969, the United States Patent office gave Carruthers credit for inventing the “Image Converter” – an instrument that detects electromagnetic radiation in short wave lengths – and in 1970 his invention recorded the first observation of molecular hydrogen in outer space. In 1972, Carruthers invented the first moon-based observatory, the far ultraviolet camera / spectrograph, which was used in the Apollo 16 mission.

In the 1980s, Carruthers helped create a program called the Science & Engineers Apprentice Program, which allowed high school students to spend a summer working with scientists at the Naval Research Laboratory. When, in 1986, Halley’s Comet passed Earth for the first time since 1910, one of Carruthers’ inventions captured an ultraviolet image of it. In 1991, he invented a camera that was used in the Space Shuttle Mission. Since 2002, Carruthers has taught a two-semester course in earth and space science at Howard University in Washington, D.C., an education initiative sponsored by a NASA Aerospace Workforce Development Grant.

Carruthers has been the recognized by professional and academic organizations for his achievements. The Office of Naval Research honored him as a distinguished Lecturer for his achievements in the field of space science. He is also a recipient of the Arthur S. Flemming Award, the Warner Prize from the American Astronomical Society, and an Exceptional Scientific Achievement Medal from NASA. Carruthers was inducted into the National Inventors Hall of Fame for his contributions to aeronautical engineering.

George Carruthers was interviewed by The HistoryMakers on 08/26/2012.