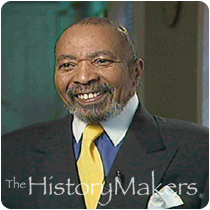 See how George Beach is related to other HistoryMakers
Donate Now

Artist and businessman George Albert Beach was born August 14, 1936 in New York City. His mother, Ethel McKinnon, came from Kingston, New York and his father, James H. Beach, was from Montserrat. The family moved to Philadelphia in 1946 where Beach attended William Pierce Elementary School, Gillespie Junior High School and studied art at Fleisher Art Memorial. Beach graduated from Simon Gratz High School in 1954 and earned his B.F.A. degree in advertising design from the University of the Arts in 1958. Beach also studied at L'Academie de la Grande Chaumiere and at L’Alliance Franciase, both in Paris.

He started Beach Advertising in 1974 and his clients have included Pfizer, John F. Rich and Company, Wyeth Pharmaceuticals, McDonalds and the Pennsylvania Department of Aging. In 1964, Beach was elected as the first African American president of the Artist Guild of Delaware Valley and he served in that capacity until 1967. Beach also joined the American Numismatic Association and founded the African American Commemorative Society (AACS). In 1970, he paired up with Calvin Massey and Robert L. Jefferson to start the fully illustrated African American Historical Calendar, which has been produced annually since.

A recipient of numerous awards including the Addy, Neographic, and Art Directors Club awards and a best of category award from Printing Industries of America, Beach participated in the White House Conferences on Small Businesses and is active with the Small Business Administration. He serves on the boards of the Alliance for Aging Research, the Philadelphia African American Museum, Historic Philadelphia, Inc., the Philadelphia Convention and Visitors Bureau, the National Arthritis Foundation, the West Philadelphia Cultural Alliance, and the University for the Arts. Beach, who has two adult sons, lives in Philadelphia with his wife, Mary.

See how George Beach is related to other HistoryMakers
Donate Now
Click Here To Explore The Archive Today!