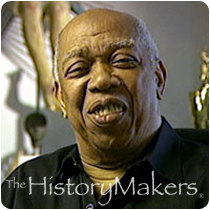 See how Geoffrey Holder is related to other HistoryMakers
Donate Now

Artist, dancer, and choreographer, Geoffrey Holder, was born in Port-of-Spain, Trinidad, on August 20, 1930. While in Port-of-Spain, Holder attended Queens Royal College, but received much of his education in dancing and painting from the Holder Dance Company, his older brother Boscoe's dance troupe.

Holder premiered in his brother's dance company at the age of seven, and by 1947, he was in charge of the troupe. After being seen by dancer Agnes de Mille in 1952, Holder was invited to New York to audition; to finance the trip for himself and his troupe, he sold twenty of his paintings. After failing to receive a sponsorship to tour and perform, Holder began teaching at the Katherine Dunham School of Cultural Arts. In 1954, Holder made his first Broadway performance as Samedi in House of Flowers. For the next two years, Holder appeared as a principal dancer on the stage of the Metropolitan Opera Ballet and continued to work with his own troupe through 1960. Holder also continued to paint, and in 1957 was awarded a Guggenheim Fellowship; that same year brought his first film role, All Night Long, a modern retelling of Othello. Roles continued to come in, with Holder playing Baron Samedi in the James Bond film Live and Let Die and Punjab in Annie. In more recent years, Holder appeared in the Eddie Murphy film Boomerang.

Not limited to his acting and painting, Holder also directed; his production of The Wiz, an all-black retelling of The Wizard of Oz, earned him Tony Awards for best director and best costume design. Holder also wrote Black Gods, Green Islands, an illustrated collection of Caribbean folklore, and Geoffrey Holder's Caribbean Cookbook. Holder and his wife, dancer Carmen DeLavallade, met and married while Holder was performing in House of Flowers in 1955; the couple lived and worked in New York City.

See how Geoffrey Holder is related to other HistoryMakers
Donate Now
Click Here To Explore The Archive Today!