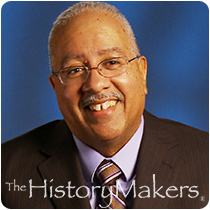 See how Geoff Brown is related to other HistoryMakers
Donate Now

Journalist Geoffrey (Geoff) Franklin Brown was born on October 30, 1952, in Pittsburgh, Pennsylvania to George F. and Helen V. Brown. Brown attended the Episcopal Cathedral School in San Juan, Puerto Rico, and graduated from Greensburg-Salem (Pennsylvania) High School in 1970. He went on to receive his B.A. degree in English literature from Bowdoin College in Brunswick, Maine, in 1974.

Upon graduation, Brown returned to Pennsylvania where he was hired as a general assignment reporter for the Pittsburgh Press. He worked at the Pittsburgh Press from 1974 to 1975, and again from 1977 to 1978. He also had two stints at Jet magazine, from 1975 to 1977 and 1978 to 1980, where he held various positions, including entertainment writer, copy editor, co-managing editor and features editor. He was then hired by the Chicago Tribune in 1980 as a copy editor. Brown went on to serve as the Tribune’s national/foreign news editor, north suburban bureau chief, and entertainment editor. In 1998, he was promoted to associate managing editor for entertainment; in 2000, he became associate managing editor for lifestyle/features. In 2009, Brown returned to duty as the Chicago Tribune’s associate managing editor for entertainment, where he supervised the daily Arts & Entertainment, Dining, Movies and On The Town sections, plus the daily and Sunday Comics pages, and related online content. In April of 2015, Brown was named the Tribune’s operations and development editor.

Brown received the Chicago Tribune’s Jones-Beck Award for Outstanding Professional Performance in 1988, and was awarded a fellowship at Maynard’s Institute of Journalism Education in 1989. He was also honored by Chicago’s Bridge to Work program, a South Side welfare-to-work program that emphasized preparing people for getting a job as well as navigating the workplace.

Geoff Brown was interviewed by The HistoryMakers on April 25, 2014.

See how Geoff Brown is related to other HistoryMakers
Donate Now
Click Here To Explore The Archive Today!