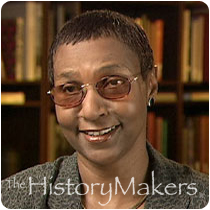 Favorite Color:
Black
Favorite Food:
Chicken
Favorite Time of Year:
Thanksgiving
Favorite Vacation Spot:
California
Favorite Quote:
This Is the Day That The Lord Has Made. We Will Rejoice And Be Glad In It.

Favorite Color:
Black
Favorite Food:
Chicken
Favorite Time of Year:
Thanksgiving
Favorite Vacation Spot:
California
Favorite Quote:
This Is the Day That The Lord Has Made. We Will Rejoice And Be Glad In It.

See how Genois Brabson is related to other HistoryMakers

Genois Brabson, the oldest of eight children, was born on August 15, 1949 in Phillips County, Arkansas. She was raised in Fort Wayne, Indiana and attended college there, graduating from Indiana University in 1974 with a B.A. in sociology and a desire to work with young people. Brabson then joined the Fort Wayne Fire Department, where she earned accolades for her work in fire safety education.

Brabson was the first woman to work as a fire dispatcher in Fort Wayne when she began in 1975. Then, in 1979, she became the first woman to attend the fire department's training academy. She worked as a fire educator and inspector until 1987, when she received a promotion to fire education director. Through her fire awareness seminars, Brabson taught both fire department employees and Fort Wayne residents, especially elementary school children. She sought and received block grants to provide smoke detectors to low-income families. When she realized the need for specialized training, she adapted her presentation for hearing-impaired children. She performed tests to determine whether smoke detectors could be designed to increase their effectiveness for hearing-impaired people and the tests showed that adjusting the pitch and location of detectors made a significant difference. Brabson also tailored her presentation for disabled people. Her fire awareness seminars are credited with saving the lives of at least two children.

Brabson has been the president of the Black Fire Fighters and a member of the Big Brothers-Big Sisters mentor program. In 1986, she was granted a Women of Achievement Award from the YWCA and a Philo T. Farnsworth Award for a children's fire safety video that aired on public television. The American Legion declared her the Indiana Fire Fighter of the Year in 1990. She was the first African American woman to receive such an award.

In 1995, Brabson moved on to new challenges and became a probation officer for Allen Superior Court Family Relations Division. She counsels juvenile offenders and their families, showing children and parents how to cope with anger, communicate and find solutions. She is married to James Brabson and has one son, Marlin.

See how Genois Brabson is related to other HistoryMakers
Click Here To Explore The Archive Today!