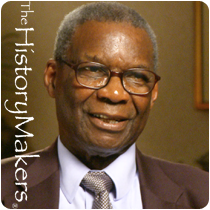 See how Gen. Julius Becton, Jr. is related to other HistoryMakers
Donate Now

Military Officer and federal government administrator Julius W. Becton, Jr. was born on June 29, 1926 in Bryn Mawr, Pennsylvania to Julius Wesley and Rose Banks Becton. He joined the Army Air Corps in July 1944 and graduated from Infantry Officer Candidate School in 1945. While on active duty, Becton graduated from Prairie View A & M College in 1960 with his B.S. degree in mathematics and the University of Maryland in 1966 with his M.A. degree in economics. He is also a graduate of the U.S. Army Command and General Staff College, the Armed Forces Staff College and the National War College. Post his military service, Becton has received honorary doctorate degrees from Huston-Tillotson College, Muhlenberg College, Prairie View A & M University, The Citadel, Dickinson College, and American Public University System.

Becton joined the 93rd Infanry Division in the Pacific at the end of World War II and was separated from the Army in 1946, but returned to active duty after President Harry S. Truman issued Executive Order 9981 to desegregate the military in 1948. Rising to the rank of Lieutenant General in 1978 he commanded the 1st Cavalry Division, the United States Army Operations Test and Evaluation Agency, and the VII Corps – the Army’s largest combat corps in Europe during the Cold War. Becton also served in the Korean War and the Vietnam War, and retired from the U.S. Army in 1983 after nearly 40 years of service. However, his public service career was far from over.

From 1984 to 1985, he served as the director of the Office of Foreign Disaster Assistance in the United States Agency for International Development. He then served as the third director of the Federal Emergency Management Agency from 1985 to 1989 under President Ronald Reagan. In his mid-sixties, Becton began a new career, that of education administrator. From 1989 to 1994, he was the fifth president of Prairie View A & M University, his alma mater – becoming the first graduate of Prairie View A & M University to attain flag rank in the military. In 1996, he became the superintendent of the Washington, D.C. public school system.

Among his decorations are the Distinguished Service Medal, two Silver Stars, two Legion of Merit medals and two Purple Hearts, along with the Knight Commander’s Cross of the Order of Merit of Germany. Becton married to Louise Thornton, and they have five children: Shirley, Karen, Joyce, Renee, and Wesley. They also have eleven grandchildren and three great grandchildren

Julius W. Becton, Jr. was interviewed by The HistoryMakers on August 27, 2012.

See how Gen. Julius Becton, Jr. is related to other HistoryMakers
Donate Now
Click Here To Explore The Archive Today!