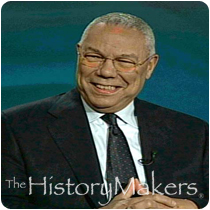 See how Gen. Colin L. Powell is related to other HistoryMakers

General Colin L. Powell, USA (Ret.) became the 65th Secretary of State on January 20, 2001. As he stated at his confirmation hearing, the guiding principle of U.S. foreign policy during his tenure was that “America stands ready to help any country that wishes to join the democratic world.”

Powell brought extensive experience with him to his office. Before becoming Secretary of State, he served as a key aide to the Secretary of Defense and as National Security Advisor to President Reagan. He also served thirty-five years in the United States Army, rising to the rank of Four-Star General and serving as Chairman of the Joint Chiefs of Staff (1989 to 1993). During this time, he oversaw twenty-eight crises including the Panama intervention of 1989 and Operation Desert Storm in the victorious 1991 Persian Gulf War.

That experience served him well, both before and particularly after the events of September 11, 2001, the day of the greatest tragedy on American soil since Pearl Harbor. As Secretary, he stood shoulder to shoulder with the President and the other members of the President’s cabinet in fighting the war on terrorism. As he often said, “winning that war is our first priority, and it will remain so for as long as necessary.”

A fervent purveyor of democratic values, Powell stressed that fighting the war on terrorism is not just a military but also a diplomatic task – the two go hand in hand. He led the State Department in major efforts to solve regional and civil conflicts – in the Middle East, between Israel and its Arab neighbors; in Sudan, Congo and Liberia; in the Balkans, Cyprus, Haiti, Northern Ireland and elsewhere. He was especially concerned with the peace and security of Afghanistan and Iraq, countries where winning the peace is as important as Coalition battlefield victories. In all areas, he used the power of diplomacy and the universal ideal of democracy to build trust, forge alliances and then begin to transform these once unstable regions into areas where societies and cultures prosper.

Powell was devoted to grasping opportunities as well as to confronting the global and regional security challenges of the 21st century. He was at the forefront of the administration’s efforts to advance economic and social development worldwide – in the fight against HIV/AIDS, in the promise of the Millennium Challenge Account, the most significant change in helping needy nations since the Marshall Plan, and in pursuing a freer trading and investment climate worldwide. These efforts, too, are not separate from the nation’s security agenda. Indeed, in testimony before the Senate Foreign Relations Committee, then Secretary Powell affirmed that our main purpose is to extend democracy, prosperity, and freedom to every corner of the world. It is a process that is establishing a balance of power that favors freedom across the globe.

Born in New York City on April 5, 1937, Powell was raised in the South Bronx. His parents, Luther and Maud Powell, immigrated to the United States from Jamaica. Powell was educated in New York City public schools, graduating from Morris High School and the City College of New York (CCNY), where he earned his bachelor’s degree in geology. He also participated in ROTC at CCNY and received a commission as an Army second lieutenant upon graduation in June 1958. His further academic achievements include a M.B.A. degree from George Washington University.

Powell’s civilian awards include two Presidential Medals of Freedom, the President’s Citizens Medal, the Congressional Gold Medal and the Secretary of Energy Distinguished Service Medal. Over two dozen countries have bestowed awards on him, including a French Legion of Honor and an honorary knighthood bestowed by H.M. Queen Elizabeth II of Great Britain.

Powell was the founding Chairman of America’s Promise – The Alliance for Youth, a national crusade to improve the lives of our nation’s youth. Established at the Presidents’ Summit for America’s Future in Philadelphia in April of 1997, and endorsed by every living U.S. President, America’s Promise aims to ensure all children in America have access to the fundamental resources needed to build and strengthen them to become responsible, productive adults. He has also been a member of the Board of Trustees of Howard University and the Board of Directors of the United Negro College Fund. Powell also served on the Board of Governors of The Boys & Girls Clubs of America and was a member of the Advisory Board of the Children’s Health Fund.

Since returning to private life, Powell has become a strategic limited partner at Kleiner Perkins Caufield & Byers, the renowned Silicon Valley venture capital firm. He is also on the Board of Directors of Revolution Health Care, a company developing strategies for consumer-directed health care. Powell is the Founder of the Colin Powell Policy Center at his alma mater, the City College of New York, and he is helping to raise funds for the Martin Luther King, Jr., Memorial in Washington, D.C. and for the construction of an education center for the Vietnam Veterans Memorial.

Powell is the author of his best-selling autobiography, My American Journey.

See how Gen. Colin L. Powell is related to other HistoryMakers
Click Here To Explore The Archive Today!