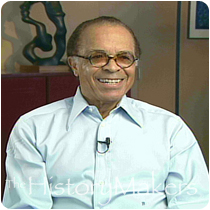 See how Gary Gayton is related to other HistoryMakers

Civil rights attorney Gary David Gayton was born on February 25, 1933 in Seattle, Washington to Virginia Clark and John Jacob Gayton, the fourth of eight children. When Gayton was five years old, his family moved to the all-white neighborhood of Madrona, and although they dealt with regular harassment, refused to leave. Gayton earned his diploma from Garfield High School in 1951 and attended the University of Washington where he was a four year varsity track man and became captain of the team.

In 1955, Gayton graduated with his B.A. degree in political science at the University of Washington. After serving honorably for two years in the United States Army, Gayton was admitted to Gonzaga University in Spokane, Washington. He earned his L.L.B. degree in 1962, and was immediately appointed by Attorney General Robert F. Kennedy to the post of Assistant U.S. Attorney for the Western District of Washington, the first African American to hold this position. Under the supervision of Assistant United States Attorney General Ramsey Clark, Gayton sued the State of Washington to allow Native Americans to sell fish caught on the reservations off the reservations.

Gayton left his position in the U.S. Attorney’s Office under Brock Adams in 1965, and, along with three associates, formed the law firm of Stern, Gayton, Neubauer & Brucker, whose clients included anti-war activists and Black Panthers. In 1966, Gayton was one of five delegates invited from the State of Washington to attend “To Fulfill These Rights,” President Johnson’s first Civil Rights Conference. Gayton continued working as an attorney, filing a successful suit on behalf of female tennis player, Trish Bostrom, demanding a women’s tennis program and the right to try out for the men’s team until such a program existed. This suit anticipated 1972’s Title IX, which prohibited sex discrimination against students and employees of educational institutions.

Gayton assisted in the organization of the black caucus at the Democratic National Convention in Chicago in 1968, where Channing Phillips was nominated as the first black Presidential contender. In 1969, Gayton represented several black football players who had been suspended for failing to take a loyalty oath for their coach, Jim Owens, at the University of Washington. Gayton was invited to become a part of Watergate prosecutor Archibald Cox’s staff in 1973, but he declined for personal reasons. Gayton also served as an arbiter for the City of Seattle during the construction of Interstate 90.

Gayton became the U.S. Secretary of Transportation Brock Adams’ Special Assistant in 1977, in which he developed an affirmative action program for the U.S. Department of Transportation which was asked to be adopted by all departments by President Jimmy Carter in his 1978 domestic policy speech. In 1980, Gayton returned to Seattle as of counsel for the law firm, Diamond & Sylvester. In 1985, Gayton became an investment banker, working as Senior Vice President for Siebert, Brandford, Shank & Company, the largest minority and female bond-underwriting firm in the nation. Gayton continues in the private practice of law. He recently served as chairman of the senior advisory board of the ninth federal judicial circuit. Gayton has served on the boards of more than sixty cultural and professional organizations. He recently was named to the Hall of Fame of Garfield High School. In 2006, the Seattle Metropolitan magazine named Gayton one of the 277 people who shaped Seattle since its founding. In 2005, Gayton received the Distinguished Alumni Award from the University of Washington in political science.

Gayton was interviewed by The HistoryMakers on October 26, 2007.

See how Gary Gayton is related to other HistoryMakers
Click Here To Explore The Archive Today!