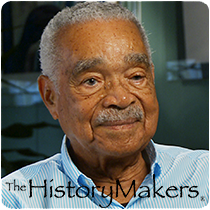 See how Garth Reeves is related to other HistoryMakers
Donate Now

Newspaper publishing chief executive Garth C. Reeves, Sr. was born on February 12, 1919 in Nassau, Bahamas. His family moved to Miami, Florida four months after he was born. His father, Harry Ethelbert Sigismund Reeves, was a partner in The Magic Printing Company and founder of the Miami Times; his mother, a homemaker. His daughter, Rachel J. Reeves, became publisher and chief executive officer of the Miami Times in 1994 following the untimely death of her brother, Garth C. Reeves, Jr. After graduating from Booker T. Washington High School in Miami in 1936, Reeves enrolled in Florida A & M University where he earned his B.A. degree in printing in 1940.

Reeves served in the U.S. Army during World War II from 1942 to 1946 in both the European and Pacific theaters. He then returned to Miami to work under his father Harry Ethelbert Sigismund Reeves, who founded the Miami Times newspaper in 1923. In 1970, Reeves was named publisher and chief executive officer of the Miami Times when his father passed. Reeves went on to become the first African American to serve on the governing boards of the Miami-Dade Community College, Barry University, the Greater Miami Chamber of Commerce, and the United Way of Dade County. He also served as organizing chairman of the board for National Industrial Bank, which was the first integrated bank in the State of Florida. During the 1950s, Reeves worked to integrate the local beaches, parks, and golf courses. Reeves served for ten years as president of the Amalgamated Publishers of New York City, which represents over one hundred African American-owned newspapers throughout the United States. He was also elected to serve two terms as president of the National Newspaper Publishers Association.

Garth C. Reeves, Sr. was interviewed by The HistoryMakers on June 5, 2013.

See how Garth Reeves is related to other HistoryMakers
Donate Now
Click Here To Explore The Archive Today!