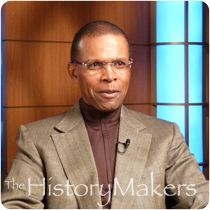 Favorite Food:
Fried Chicken
Favorite Time of Year:
Christmas
Favorite Quote:
As You Prepare To Play, You Must Prepare To Quit.

Favorite Food:
Fried Chicken
Favorite Time of Year:
Christmas
Favorite Quote:
As You Prepare To Play, You Must Prepare To Quit.

See how Gale Sayers is related to other HistoryMakers
Donate Now

NFL Hall of Famer Gale Eugene Sayers was born on May 30, 1943, in Wichita, Kansas. Sayers grew up in Omaha, Nebraska and graduated from Omaha Central High School. As a running back at the University of Kansas, he was a two-time All-American player known as "The Kansas Comet." In 1963, he set an NCAA Division I record with a 99-yard run against Nebraska.

After completing his professional football career in 1971, Sayers returned to the University of Kansas to receive his B.A. degree in physical education while also working as the assistant athletic director. Sayers accepted the assignment as assistant director of the Williams Education Fund for three years and received his M.A. degree in educational administration. Sayers served as athletic director at Southern Illinois University from 1976 to 1981.

Sayers moved back to Chicago and launched a sports marketing and public relations firm, Sayers and Sayers Enterprises. He then started a computer supplies business in 1984 and built that business into a provider of technology products and services. In 1999, Sayers was inducted into another Hall of Fame - the Chicago Entrepreneurship Hall of Fame. He is also a recipient of the prestigious Ernst & Young Entrepreneur of the Year Award.

Sayers spends a great deal of time supporting and fundraising for a variety of charitable organizations including the Better Boys Foundation, the Cradle Adoption Agency, the Gale Sayers Center, Grid Iron Greats, Junior Achievement, and Wesley House. The University of Kansas has established the Gale Sayers Microcomputer Center in recognition of Sayers’s commitment to both education and technology. Sayers has authored an instructional publication on the fundamentals of football's offensive strategies called Offensive Football. In addition, his 1971 autobiography, I Am Third, was produced into an award-winning television movie, Brian's Song, starring James Caan and Billy Dee Williams. In 2007, he released a new book, Gale Sayers, My Life and Times.

Sayers serves on the board of directors at American Century Mutual Funds, located in Kansas City, Missouri.

See how Gale Sayers is related to other HistoryMakers
Donate Now
Click Here To Explore The Archive Today!