Information about Gail A. Hansberry 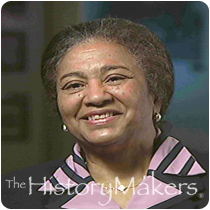 Favorite Color:
Purple
Favorite Time of Year:
Fall, Spring
Favorite Quote:
One Should Be Consistent And Fair In Their Relationships With People.

Favorite Color:
Purple
Favorite Time of Year:
Fall, Spring
Favorite Quote:
One Should Be Consistent And Fair In Their Relationships With People.

See how Gail A. Hansberry is related to other HistoryMakers

Contractor and Graphic Artist/Photographer, Gail A. Hansberry was born in Washington, D.C. on September 4, 1939. Her mother, Myrtle Kelso Hansberry, taught French in a junior high school. Her father, William Leo Hansberry was a pioneer in the study of Ancient African History and taught at Howard University in Washington D.C. from 1922–1959. Hansberry attended public schools and during the 10th grade she lived in Cairo, Egypt, where her father was a Fulbright Research Scholar.

In 1960, Hansberry received her B.A. degree in Art from Howard University. In 1962 she received her M.A. degree in Art History from Smith College, Northampton, Massachusetts, where she also took Leonard Baskin’s graphics courses and made a book of etchings by hand entitled Insects (1962); a later enlarged version was entitled Insects and Haiku (1970).

In 1962-63 Hansberry worked in the Publications Office of the National Gallery of Art and taught art at Taft Junior High School in Washington, D.C. From 1963–1966 she was an instructor of Art History at North Carolina College (now North Carolina Central University) in Durham, N.C. In 1966, Hansberry moved to New York and was a researcher at Time Life Books from 1967-1976. Then, through 1979, she was a freelance editorial researcher and photographer in NY.

Hansberry returned to Washington, D.C. in 1980 and for about twenty eight years was an English Language Officer (ELO), contracted by the U.S. Department of State.

Organizations to which Hansberry has belonged include BPIA (International Association of Black Professional in International Affairs); AKA (Alpha Kappa Alpha Sorority); (NCIV) National Council for International Visitors, and WBG (Washington Biography Group). From 1990 -1992 Hansberry served as executive director of the Association for the Study of African American Life and History (ASALH).

Hansberry’s prints and hand-made books are in private collections and at Smith College, the Schomburg Center for Research in Black Culture in New York City and the Library of Congress. Hansberry did photographic studies of the George Washington Bridge in New York and the Golden Gate Bridge in San Francisco. Two photographs of her study of the Brooklyn Bridge were included in its 1983 Centennial Exhibit at the Brooklyn Museum (“The Great East River Bridge 1883-1983”.) Her photography is also included in the 2009 Colors of Life, published by The Exposure Group African American Photographers Association, Inc. of which she is a member. In addition, a transcript of a video interview with Hansberry was published in Artist and Influence, Vol. XXIX, 2010, in the Hatch-Billops Collection Inc, Archives of African American Cultural History.

Gail A. Hansberry was interviewed by The HistoryMakers on February 9, 2007.

See how Gail A. Hansberry is related to other HistoryMakers
Click Here To Explore The Archive Today!