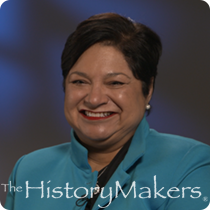 See how Gabriella E. Morris is related to other HistoryMakers
Donate Now

Foundation chief executive Gabriella E. Morris was born on March 26, 1956 in Houston, Texas to Elise LeNoir Morris and John E. Morris. After graduating from high school, Morris received her A.B. degree in architecture and urban planning, and a certificate in African American studies, from Princeton University in Princeton, New Jersey in 1978. She later earned her J.D. degree from the University of Texas Law School in Austin, Texas. Morris has also received certifications from Harvard Business School’s Executive Education program in corporate social responsibility, and from Stanford University’s Center for Social Innovation.

Morris was hired as real estate council for The Southland Corporation in Dallas, Texas. She then became associate counsel of the Houston-based law firm of Baker and Botts in its securities, real estate and oil and gas practices. In 1985, she was hired by Prudential Financial as a regional counsel and associate general counsel for the company’s real estate operations. Morris then became president of the Prudential Foundation in 1994, and also served as vice president of community resources. In that position, Morris helped develop a number of community programs focused on education, including the Prudential Young Entrepreneurs Program, founded in 1999. She also helped form the New Jersey Statewide Education Summit, which aided the development of new education standards for the City of Newark and was influential in creating one of the first charter school lending programs in the nation. After over twenty years of service, Morris left Prudential in order to form her own consulting firm, Connective Advisors LLC. In 2014, she was named as the senior vice president of the UNICEF Bridge Fund.

In addition to her professional career, Morris has been involved in her community through membership in many organizations. She was a founding member of United States Artists, the Brick City Development Corporation, and the Newark Trust for Education. Morris also served as a board member for the Annie E. Casey Foundation, the Harlem School of the Arts, the New Jersey Performing Arts Center Women’s Association, NAACP Legal Defense and Education Fund and the Alvin Ailey American Dance Theater.

Gabriella E. Morris was interviewed by The HistoryMakers on March 27, 2017.

See how Gabriella E. Morris is related to other HistoryMakers
Donate Now
Click Here To Explore The Archive Today!