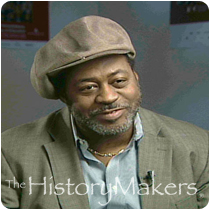 See how Fruteland Jackson is related to other HistoryMakers

Blues musician and music instructor Fruteland Jackson was born Vincent Sherman Chandler on June 9, 1953 in Doddsville, Sunflower County, Mississippi. His maternal family tree can be documented back to 1863. Jackson is the fourth of six children born to John Chandler and Ida B. Collins. His childhood years were spent in Chicago and Mississippi. Jackson was raised in a musical family and was introduced to the guitar at the age of ten but had little interest in studying the instrument. Instead, Jackson played bugle and trombone while in high school. Jackson graduated from high school in 1970 and entered Columbia College in Chicago, Illinois, where he studied music and theater. He later studied vocal performance at Chicago’s Roosevelt University. Jackson then postponed his artistic ambitions to work as a private investigator and with the State of Illinois Department of Human Rights.

In 1980, Jackson moved back to Mississippi, settling in Biloxi. From 1981 to 1985, he owned and operated Camel Seafood Company. Hurricane Elena of 1985 had devastating effects in Mississippi and left Jackson without a business. At this time, he returned to his musical ambitions and immersed himself in study of the guitar and in blues music.

Jackson performs and preserves acoustic blues from both traditional and contemporary styles including field hollers, work songs, Delta blues and Piedmont blues. In 1996, Jackson helped to establish the “Blues In The Schools” program. Jackson’s educational blues programs have been presented at schools and universities throughout the United States. In 1996, Jackson was awarded the Illinois Arts Council Folk/Ethnic Heritage Award. In 2003, he was nominated for the W.C. Handy Award as “Acoustic Blues Album of the Year”, for his album, Blues 2.0. Jackson records for Electro-Fi Records.

Fruteland Jackson was interviewed by The HistoryMakers on February 12, 2007.

See how Fruteland Jackson is related to other HistoryMakers
Click Here To Explore The Archive Today!