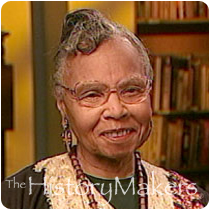 See how Fredi Brown is related to other HistoryMakers
Donate Now

Fredi Brown, founder and director of the Family Heritage House Museum in Bradenton, Florida, was born on December 4, 1923, in Bradenton. She grew up in a close-knit neighborhood where everyone listened to Joe Louis fights on the same radio. Brown was active in the church and an excellent student at Lincoln High School, where she graduated in 1939 as valedictorian of her class.

Brown wanted to become a dietician and enrolled in Florida A&M University in East Tallahassee, Florida. She wrote for the school paper and when she graduated with a B.A. in 1944, she decided to pursue a career in journalism. She moved to Kansas City, Missouri, and through the National Urban League found a position writing ads for the Kansas City Call. There, Brown met her husband, Ernest Brown, whom she married in Detroit, Michigan, in 1946. The Detroit Urban League hired Ernest and the couple became immersed into the public life of Detroit. The Browns collected materials relating to black life in Detroit from civil rights victories to the devastating 1967 riots. When they relocated to Bradenton in 1976, Brown, who taught at Manatee Community College, shared these items with her students.

When she retired in 1990, she sought a place to house her collected books and papers. Interest from the college administration and community resulted in a new wing of the library that now serves as the home of the Family Heritage House Museum. Focusing primarily on African American history and culture the museum such figures as Charles Drew and John Henrik Clarke are featured in this 2,085-square foot facility that houses books, tapes, paintings, prints, heirlooms and photographs. The museum opened in 2000 and is the only museum of its kind on a community college campus.

Brown was interviewed by The HistoryMakers on April 24, 2002.

See how Fredi Brown is related to other HistoryMakers
Donate Now
Click Here To Explore The Archive Today!