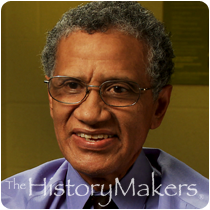 See how Frederick Oliver is related to other HistoryMakers
Donate Now

Physicist Frederick William Oliver was born on October 15, 1940, in Baltimore City, Maryland, to Hattie and Willis Oliver. Oliver was raised on J Street, in an African American community located in Sparrows Point. He attended Sollers Point High School, graduating in 1958. Oliver then went to Morgan State University where he received his B.S. degree in physics in 1962, under the mentorship of Dr. Julius Taylor. Oliver continued his education, receiving his M.S. and Ph.D. degrees from Howard University in 1965 and 1972, respectively, both in condensed matter physics. His research examines the Mossbauer Effect and its uses in spectroscopy.

Oliver has published thirty-two full-length papers since 1965, and presented at numerous conferences. He has been awarded the Dr. Iva G. Jones Medallion Mantle Award and is an inducted member of Beta Kappa Chi, Sigma Chi, and Sigma Pi Sigma. Oliver’s most recent grant was funded by the Department of Energy for its “Educational Bridge Program.”

Oliver lives in Maryland with his wife Dianne. He has two grown children, Chaszetta and Chinyere from a former marriage.

Frederick William Oliver was interviewed by The HistoryMakers on July 15, 2010.

See how Frederick Oliver is related to other HistoryMakers
Donate Now
Click Here To Explore The Archive Today!