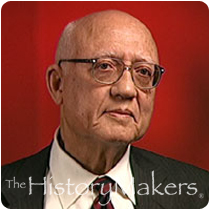 See how Frederick C. Ford is related to other HistoryMakers

Prominent business and civic leader Frederick C. Ford was born on August 27, 1926 in St. Louis, Missouri. The youngest of six children of Florence and Lafayette, a housewife and a postal clerk, Ford attended Sumner High School in St. Louis. As an accounting student at the University of Illinois at Urbana-Champaign, he served as treasurer of the national accounting honorary society and president of the student senate. Ford received a B.A. and an M.S. in accountancy from the University of Illinois.

After graduation Ford worked as an accountant at Mary T. Washington and Company in Chicago. In 1951, he began working as a staff accountant at Draper and Kramer, a Chicago firm founded in 1893 to finance real estate and provide management services. Ford rose through the ranks at Draper and Kramer, eventually serving as executive vice president and chief financial officer. A dedicated civic leader, he was the first African American president of Chicago's largest club, the Union League Club, where he has volunteered for thirty-four years. Ford also served as vice president of the YMCA of Metropolitan Chicago, and he was a member of the Gary Board of School Trustees for eight years, two of which he served as president. In Gary, he founded the Gary Educational Development Foundation, dedicated to improving elementary and secondary schools, and served as vice chairman. He continues to chair the Foundation's Investment Committee.

Ford is vice chairman of the board of directors at Draper and Kramer and a trustee of Elmhurst College. A member of the Economic Club of Chicago and the Financial District Rotary Club of Chicago, he has two children with his wife, Dorothy, whom he married in 1953. Their son, Lafayette, works as a banker, and their daughter, Rebecca, is an attorney at Draper and Kramer.

See how Frederick C. Ford is related to other HistoryMakers
Click Here To Explore The Archive Today!