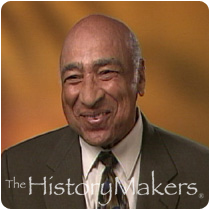 See how Fred Rice, Jr. is related to other HistoryMakers
Donate Now

After serving in the U.S. Army for two years in Korea in the early 1950s, Rice returned to Chicago and worked for the Chicago Post Office before passing the Chicago Park District Police Department examination in 1955. He later received his bachelor’s and master’s degrees from Roosevelt University, and graduated from the Federal Bureau of Investigation (FBI) Executive Institute in Quantico, Virginia.

In 1955, Rice became a patrol officer for the Chicago Park District Police Department, which later merged with the Chicago Police Department. He was promoted to sergeant, and then to the role of civil service captain. In 1983, Rice made history when he was appointed under Chicago Mayor Harold Washington as superintendent of the Chicago Police Department, becoming the first African American to hold the position. During his tenure, Rice ushered in a new era of race relations among the officers and promoted communication between them and the communities they patrolled. He retired as superintendent of the Police Department in 1987 and went on to serve as an adjunct professor of criminal justice at the University of Illinois from 1990 to 2001. He was also a founding member of the National Organization of Black Law Enforcement Executives.

Rice passed away on January 10, 2011 at the age of 84. He was married to Thelma Rice and was the father of two children, Lyle and Judith.

Fred Rice was interviewed by The HistoryMakers on June 27, 2002.

See how Fred Rice, Jr. is related to other HistoryMakers
Donate Now
Click Here To Explore The Archive Today!