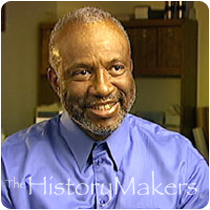 See how Fred Jones is related to other HistoryMakers

Fred Jones, Jr., has devoted his life to entertaining others. Born January 2, 1948, in Memphis, Tennessee, to Lula and Freddie, Jones was the fourth of five children. He attended public schools in Memphis and then went on to earn his B.A. in 1971 from the University of Memphis.

While at the University of Memphis, Jones worked for Union Planters Bank as an internal auditor and assistant branch manager. Following graduation, however, Jones moved into the entertainment industry, working as a tour manager for Isaac Hayes until 1975. Jones then went on to do independent promotions, managing and producing events, for many in the entertainment industry. In 1984, Jones founded Summitt Management Corporation, where he currently serves as president.

During his career, Jones has created numerous entertainment promotions, including the Southern Heritage Classic Music and Football Weekend and the Southern Heritage Classic 2 Basketball Weekend, featuring ever-popular competitions among historically black colleges and universities. He also created the world-renowned Memphis Blues Festival. Jones has also brought Memphis some of its largest concerts and has taken concerts to African American audiences across the country.

Jones has been the recipient of numerous awards over the years, including the 2002 Award of Excellence from the Thurgood Marshall Scholarship Fund; the 2002 African American Male Image Award for Business from Phi Beta Sigma Fraternity; the 2000 Outstanding Community Sales Award from the Sales and Marketing Executives of Memphis; and the 1996 Black Business of the Year Award from the Memphis Black Business Association. He is active in a number of civic organizations, including as a lifetime member with the NAACP, a member of Leadership Memphis, and as President of the Southern Heritage Foundation.

Jones and his wife, Carolyn, live in Memphis. They have six children.

See how Fred Jones is related to other HistoryMakers
Click Here To Explore The Archive Today!