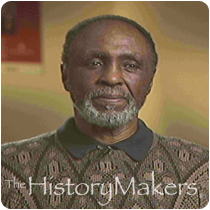 See how Fred Hunter is related to other HistoryMakers

Newspaper manager Frederick Fenton Hunter was born on June 15, 1936 in Asheville, North Carolina to Marjorie and Ray Hunter. Hunter’s parents divorced, and the family moved to Evanston, Illinois when he was eight. Hunter was an outstanding athlete at Evanston Township High School, where he graduated in 1954. He then enlisted in the U.S. Marine Corps, where he spent three years, mostly stationed in Southern California. After his discharge, he enrolled in Illinois State University, a teaching college in Normal, Illinois. He earned his B.A. degree in social science with a minor in Spanish in 1962.

Hunter took a job teaching in the Chicago Public School System until he began work as a sales representative for the American Oil Company (Amoco) in 1965. In 1969, Hunter was able to secure his own Amoco filling station, which became very successful.

Looking for a new career path, Hunter earned his M.A. degree in public administration at Roosevelt University in Chicago. Because government jobs during the Reagan Administration of the 1980s were slim, he began working part-time as a newspaper deliveryman for The Chicago Tribune. Hunter’s ethic for hard work was noticed by his superiors, and he was offered a full-time position as a district manager for Evanston and Skokie, Illinois. Over the next few years, Hunter climbed up the managerial ladder, reaching the level of department head in 1990. Eventually, Hunter was promoted to Tribune Corporate Headquarters as the first Director of Diversity Management in 1996, a position he retired from four years later. Hunter mentored dozens of minority employees at The Chicago Tribune and now lives with his wife in South Carolina.

Frederick Hunter was interviewed by The HistoryMakers on April 24, 2007.

See how Fred Hunter is related to other HistoryMakers
Click Here To Explore The Archive Today!