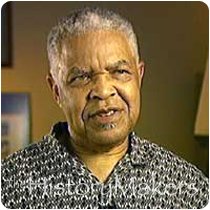 Favorite Color:
Blue, Brown
Favorite Food:
All Food
Favorite Time of Year:
Fall
Favorite Vacation Spot:
Colorado Springs, Colorado
Favorite Quote:
Where there is a will, there is a way.

Favorite Color:
Blue, Brown
Favorite Food:
All Food
Favorite Time of Year:
Fall
Favorite Vacation Spot:
Colorado Springs, Colorado
Favorite Quote:
Where there is a will, there is a way.

See how Fred Davis is related to other HistoryMakers

Rising to become the first black chairman of the Memphis City Council, Fred L. Davis was born in Memphis, Tennessee, on May 8, 1934. After graduating from Manassas High School in Memphis in 1953, Davis went to Tennessee State University. After he graduated in 1957 with his BS, Davis entered the Army and served in France for two years. After returning from the Army, he began pursuing his Master's Degree at Memphis State University. Before graduating with his Master's, Davis was elected to serve on the city council.

Davis opened his own insurance agency, Fred L. Davis Insurance, in 1967. The agency was one of the first African American-owned insurance agencies in the South. When the sanitation workers of Memphis went on strike in 1968, Davis was serving on the city council. Siding with the strikers, Davis urged the city to recognize their union. Over the course of several months, there was violence by the police against the strikers when they would march, and leaders from the NAACP and the Southern Christian Leadership Conference came to support the strike. It was this strike that brought Dr. Martin Luther King, Jr. to Memphis, where he was assassinated on April 4, 1968, and the strike ended soon thereafter. Davis later became the first African American chairman of the Memphis City Council.

Fred Davis Insurance is one of the most respected companies in Memphis, growing from a small office to a powerhouse of sales. Davis himself is very active in the community, serving on the board of directors of the Assissi Foundation, as a trustee of the Community Foundation, a director of the Memphis Leadership Foundation and a past president of the University of Memphis Society. He has been presented with the Humanitarian of the Year Award by the National Council of Christians and Jews and the Communicator of the Year Award by the Public Relations Society. Davis is married with three children and two grandchildren.

Davis was interviewed by The HistoryMakers on June 23, 2003.

See how Fred Davis is related to other HistoryMakers
Click Here To Explore The Archive Today!