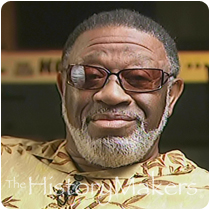 Born on October 8, 1938, in Chattanooga, Tennessee, Fred Cash was the third of four children in a musical family. Cash’s mother played the piano and he and the rest of his family sang at Chattanooga’s Beulah Baptist Church, which he attended “three times a day” growing up. At age twelve, Cash and his sixteen-year-old neighbor, Samuel Gooden, began to perform together at Gooden’s church as the Southland Jubilee Singers. The duo was also drawn to the music of the Platters and Ray Charles, and spent their evenings singing rhythm and blues on the corner.

At age fourteen, Cash began to perform at local nightclubs with Gooden and their friends Arthur Brooks and Emanuel and Catherine Thomas under the name Four Roosters and a Chick. Cash would sneak out of his bedroom window to perform, but when the rest of the Roosters decided to move to Chicago in 1957, Cash’s mother prevented him from doing so; the Thomas siblings also remained in Chattanooga. Brooks’s brother, Richard, met a tenor at the YMCA in Chicago by the name of Jerry Butler, who at the time was working a day job as a short-order cook. Butler’s partner in the Northern Jubilee Gospel Singers was Curtis Mayfield; when Gooden and Brooks moved to Chicago, the group gained Mayfield and Butler and called themselves The Impressions. The group released their first hit, “For Your Precious Love,” on Vee-Jay Records in 1958.

In 1959, after Butler left the group, The Impressions drove to Chattanooga to lure Cash back. Impressed with their success, Cash dropped out of Howard High School in the eleventh grade to join them in Chicago. The next year, Mayfield—the songwriter and leading force behind the group—encouraged Cash, Gooden, and the Brooks brothers to come to New York and record on ABC-Paramount. There, The Impressions released their 1961 hit “Gypsy Woman.” In February 1963, Mayfield, Cash, and Gooden decided to return to Chicago, while the Brooks brothers stayed in New York.

The Impressions worked with many vocalists, including Leroy Hutson, Reggie Torian, Ralph Johnson, and Nate Evans, after Mayfield’s departure. In 1991, The Impressions were inducted into the Rock and Roll Hall of Fame. After Mayfield’s tragic paralysis in 1990 and death in 1999, Cash and Gooden continued to perform, touring with Eric Clapton in 2001. At the time of this interview, Cash, Gooden, and Willie Kitchens, Jr. were still performing as the Impressions; the group remained based in Chattanooga, Tennessee, where Cash resides with his wife, Cynthia.