Information about Franklin A. Thomas 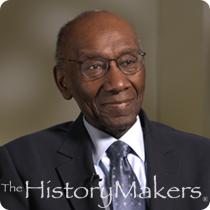 See how Franklin A. Thomas is related to other HistoryMakers
Donate Now

Foundation executive and lawyer Franklin A. Thomas was born on May 24, 1934 in Brooklyn, New York to James and Viola Thomas. He graduated from Franklin K. Lane High School in 1952, and attended Columbia University, where he played basketball, became the first African American to captain an Ivy League basketball team, and was named the league’s most valuable player in 1955 and 1956. Thomas earned his B.A. degree from Columbia University in 1956 and went on to earn his L.L.B. degree from Columbia Law School in 1963.

After earning his B.A. degree, Thomas joined the U.S. Air Force as a strategic air command navigator, where he served as captain from 1956 to 1960. In 1964, he was admitted to the New York State Bar and began his legal career as an attorney at the Federal Housing and Home Finance Agency’s New York office. During the same year, Thomas served as Assistant U.S. Attorney for the Southern District of New York. From 1965 to 1967, he served as deputy police commissioner in charge of legal matters for the New York City Police Department, where he established the Civilian Complaint Review Board. From 1967 to 1977, Thomas served as president and chief executive officer for the Bedford-Stuyvesant Restoration Corporation, and was credited with raising approximately $63 million in public and private funds, and serving in the forefront of community redevelopment efforts. In 1977, Thomas resumed his private legal practice, until 1979, when he was selected to serve as the first African American president of the Ford Foundation, where he served until 1996.

Thomas served as the chairman of the Rockefeller Foundation-funded Study Commission on U.S. Policy Toward South Africa from 1979 to 1981, and produced the comprehensive, groundbreaking report on apartheid, Time Running Out. He went on to serve as a member of the U.S. Secretary of State’s Advisory Committee on South Africa from 1985 to 1987.

Thomas served as chairman of the Secretary of State’s Advisory Committee on South Africa, the Study Commission on United States Policy Toward Southern Africa, and the September 11th Fund. He has also served on the board of directors for the Aluminum Company of America, Avaya, CBS Inc., Cummins Engine Co., Inc., Citicorp/Citibank, and Lucent Technologies. In 2005, Thomas founded the TFF Study Group, a nonprofit organization dedicated to development in South Africa in 2005.

Franklin A. Thomas was interviewed by The HistoryMakers on March 28, 2017.

See how Franklin A. Thomas is related to other HistoryMakers
Donate Now
Click Here To Explore The Archive Today!