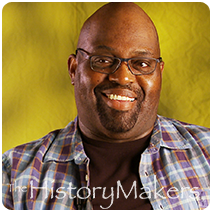 See how Frankie Knuckles is related to other HistoryMakers

DJ Frankie Knuckles was born in the Bronx, New York on January 18, 1955. The first music he was exposed to as a child came from his sister’s jazz record collection. He was naturally creative and studied commercial art and costume design before he started spinning records as a teenager in 1971.

Knuckles’ first DJing job came from Tee Scott, whom he credits as both a legend and a major influence on his own style. In 1972, Knuckles and childhood friend Larry Levan first worked together at the New York City club, The Gallery. When Levan left to work at Continental Baths in 1973, Knuckles followed to work as the alternate DJ to Levan. He remained at Continental Baths until the club closed in 1976. In March of 1977, Knuckles played the opening night of the Chicago private after hours club, US Studio -The Warehouse, which was located in a three-story factory building in Chicago’s West Loop industrial area. In 1983, Knuckles opened his own club, The Power Plant which was located in an industrial space near the Cabrini Green housing projects.

After more than a decade behind the turntables in dance clubs, Knuckles began to record tracks as well as play them. In 1983, a 12-inch single of his Warehouse classic “Let No Man Put Asunder” was released on the Salsoul label. The song went on to become a house classic. Knuckles produced songs for local Chicago vocalists and wrote such tracks as “Baby Wants To Ride,” “Bad Boy,” “Cold World" and “Your Love,” which was a breakthrough hit for Chicago native Jamie Principle. Knuckles released a hit with “You Can't Hide” in 1986. Knuckles closed the Power Plant that same year. In 1987, he returned home to New York City and secured gigs at the city’s hottest clubs, including the Roxy and Sound Factory. Knuckles, joined David Morales, (one of the biggest names in house music), along with Judy Weinstein founded the Def Mix music production company in 1988.

In 1991, Knuckles signed with Virgin Records, becoming one of the first DJs to sign to a major label. In 1997, he became the first DJ to win a Grammy Award for "”Remixer of the Year.” Knuckles’ 2002 album, Motivation, was his first release of completely original tracks, rather than a remix album. Knuckles kicked off the Def Mix 15th Anniversary tour in Sydney, Australia in 2003. Knuckles has also remixed songs by superstars such as Janet Jackson, Diana Ross, Luther Vandross, Chaka Khan, En Vogue, and Michael Jackson.

Frankie Knuckles was interviewed by The HistoryMakers on August 23, 2013.

See how Frankie Knuckles is related to other HistoryMakers
Click Here To Explore The Archive Today!